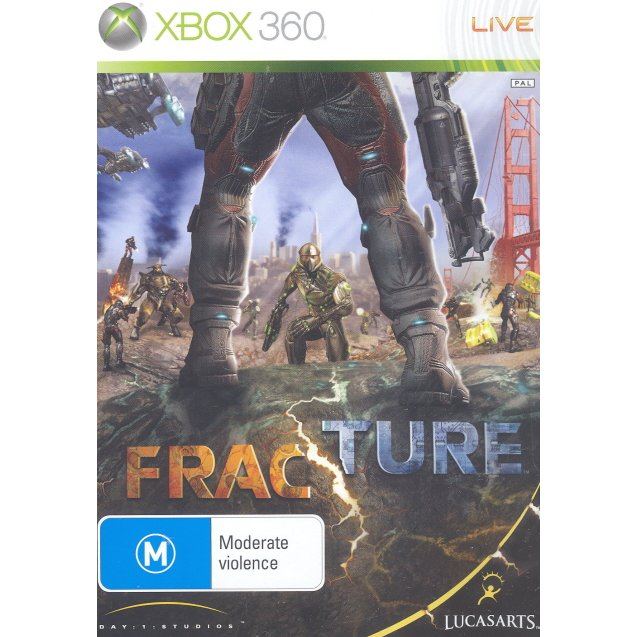 LucasArts
Rated
By Our Customers
Compatible with Xbox360™ (X360)

Works on all systems sold worldwide, a correct regional account may be required for online features.
1-5d Expected stock arrival within 1-5 days.
US$9.99
Our previous price:US$ 19.99
You save: US$ 10.00( 50% )
Manufacturer
LucasArts
Rated By Our Customers
1-5d Expected stock arrival within 1-5 days
Price
US$9.99
Our previous price:
US$ 19.99
You save:
US$ 10.00( 50% )
Play-Asia.com Return & Refund Policy
Trustpilot
Trustpilot
Click on a thumbnail to see more pictures for Fracture

The world is in chaos. After years of neglecting the environment, nature has fought back with devastating effect. Earthquakes, floods and tornadoes have reduced the United States to a mere shadow of its former self, effectively cutting the East and West coasts off from each other. And with division has come dissent. Thousands died and those that survived were forced to adapt to a new way of life. In the East, the path to survival was paved with technology and cybernetic enhancement. In the West, survival of the fittest took on new meaning with stem cell research and genetic modification. These two ideologies and ways of life lead to a division so great that war is the only course of action.

In Fracture™, take on the role of Atlantic Alliance soldier Jet Brody as he goes against the genetically enhanced Pacificans and their fanatical leader General Nathan Sheridan. Unleash the power of terrain-deforming weapons that literally reshape the battlefield before your very eyes, and decimate your enemies with a wide array of weapons with earth-shattering effects.

If you are familiar with Fracture, why not let others know?