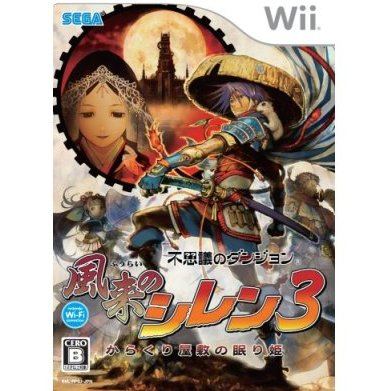 During his travels, Shiren is led to the Karakuri mansion by his uncle a.k.a his kendo teacher's mysterious key and together with his partner, a talking ferret, they must solve the mysteries within the dungeons and battle the monsters hidden within.Aside from the randomly generated dungeons and the older monsters, the system is upgraded to include an array of new elements like an online system that allows you to contact other users via the Wi-Fi network and a variety of new monsters that are based on ancient Japanese myths and traps that controls the flows of battles that even veteran gamers will find challenging.

If you are familiar with Fushigi no Dungeon - Furai no Shiren 3: Karakuri Yashiki no Nemuri Hime, why not let others know?

[This review is based on another version of this product]
luckydan (69) on 13, Dec. 2010 13:53 (HKT)
Although similar to pokeman dungeon series (made by the same guys chunsoft). This game was what made them.

Shiren is a rogue like game third in the series, compared to the other ones which were hard cause once you die everything resets and you must start over again items levels the whole thing. Where as this one is quite easy cause you can retain everything.

So if you want a starting point of an Mystery Dungeon game this is as good as it gets.
[This review is based on another version of this product]
amonjuhu (11) on 27, Apr. 2010 16:15 (HKT)
As a main game I give it 4/5, but as a sidedish for WoW it gets 5/5
I just love how this game suits my gaming needs when I'm just playing to unwind and get into a none-complicated, casual-friendly dip into the RPG-genre. Am surprised to see how unfriendly the story is. Thought for sure this was a kid's game. However, in the end of the beginning, the story got slightly more twisted and serious. Remember, I'm not used to RPG-stories post FF7.

Only heart-ache I have with this game is how Nintendo doesn't realize the potential it holds for the more serious casual-gamer.

If the pubs had more money to market this game for the casual RPG-gamer it would've generated a lot more income.