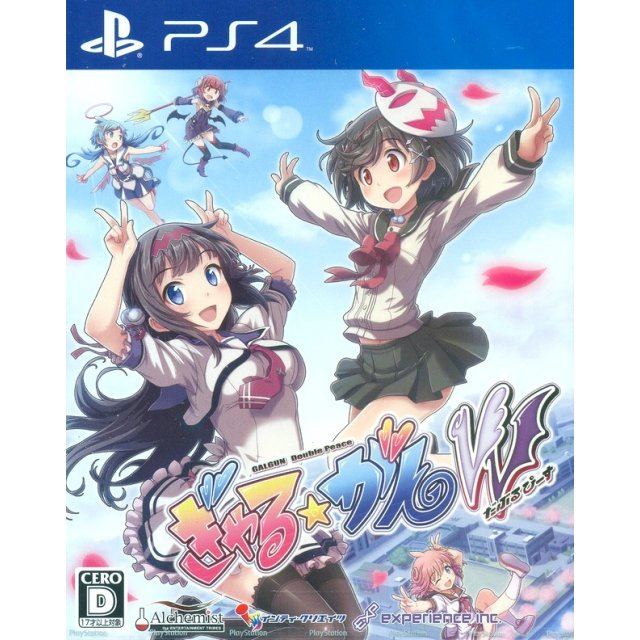 Collections
Alchemist
Rated
By Our Customers
Compatible with PlayStation 4™ (PS4™)

sold Out of print / Out of stock.
Manufacturer
Alchemist
Rated By Our Customers
Compatible With PlayStation 4™ (PS4™)
Version

For a single day Hodai Kudoki has an unrivaled sex appeal and allure, making him irresistible to women and girls around him thanks to an arrow shotby the angelEkoro. But, there is a catch: once the effects of the arrow wear off Hodai will never be able to have a girlfriend again, provided he doesn't find his fated match and her confession of love before the day's end!

Double Peace takes place a year after the events of the previous titlewith a whole new batch of heroines, students, and teachers,bringing the total number of women in the game to over 70.

In an attempt to lead Hodai astray, as well astempt him away from his 'chosen' girl, many of the other girlswill be quite aggressive with their expressions of love and affection. Some girls might just try for a hug or a kiss, while others will bombard you with their love letters or pushing and hitting you. Girls who are possessed by demons will be especially aggressive!

Players can use the "X-Ray Zoom" featureto see through obstacles, potentially revealing information about various girls and even more. Players can also charge up their shots by holding down the shoot button, landing such a shot will cause the girl it hits to falter making her easier to take out.

Heartthrob Mode is the part of the game where players can view up to threegirls from multiple angles, as well as make use of the touch panel.In order to enter Heartthrob Mode players must first max out their Heart Gauge.

If you are familiar with Gal*Gun Double Peace, why not let others know?

PD: he encontrado sólo una diferencia con la versión de PS4: no hay pausa, con la parodia de juego bishoujo que se puede ver en la grande de Sony XD
[This review is based on another version of this product]
ghostlyavenger (47) on 11, May. 2019 16:06 (HKT)
Best version
Its available on many platforms but its best on nintendo switch. Because of gyro controls (move) to enable just go to settings and enable it either all the time or when zoomed. Good precision, works on handheld or with pro controller or joycons
It's good fun.
[This review is based on another version of this product]
danarok69 (4) on 28, Feb. 2019 18:19 (HKT)
Been dying to play this!
This game is a choice. Not everyone will enjoy it. The game is very fun and lively. Very fan service and just fun to kill the time, but please wear your headphone....if do don't want any weird looks around you lol.
[This review is based on another version of this product]
shithime (5) on 09, Feb. 2019 09:25 (HKT)
Миленькая игра про трусы
Простая, но на удивление очень затягивающая и милая игра. Всем любителям фансервиса и панцушотов однозначно советую.
1 »