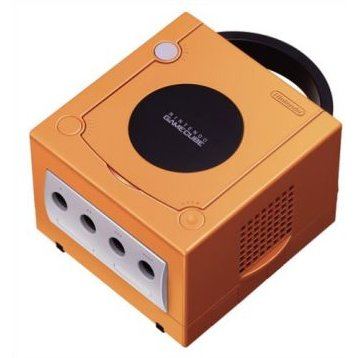 Though it looks like a toy and comes at a relatively low price, don't be fooled: Nintendo's GameCube is a powerful video game console that rightly deserves its place among the other next-generation game systems. The GameCube doesn't try to play your CD collection, run your movies, or read your e-mail. The company has concentrated its efforts on games, and the titles are uniformly smooth, with bright, fast graphics and great sound. The console is optimised to push speed up while pushing costs down, hence its position at the lower end of the price spectrum. The GameCube is the first Nintendo video game system to use a disc-based media--in this case proprietary 3-inch, 1GB discs--rather than cartridges for its games, which means lower game development costs, ie: lower prices for consumers and a higher likelihood of new game ideas. The controllers (one is included) are ergonomically designed and comfy to use even for long periods; there's a built-in rumble feature and two analog control sticks complement an intuitive series of face and shoulder buttons. The system comes with four built-in controller ports, a built-in carry-handle, and two memory card slots--plus there's the capacity for future expansion into the world of online gaming. Of course, the main advantage of the GameCube is that it's the homefield of one of the world's premier game designers--Nintendo

If you are familiar with GameCube Console - Spice Orange, why not let others know?

shadowstar123 (249) on 10, Nov. 2010 02:45 (HKT)
Nintendo's Best Machine ever!!
This is probably Nintendo's best piece of hardware! It looks like a kid's toy, but don't underestimate it's awesome power! This system really stands out with it's cool orange color. All my other systems are black, white, and gray, and there is the orange Gamecube which clearly sticks out and lets everyone know it's there!

The Gamecube has some amazing graphics, sound, and seems to not have any problems whatsoever. Gamecube also has a great library of games like Super Monkey Ball, Sonic Adventure, F-Zero GX, Smash Brothers, Zelda 64 (remake with master quest), Wario World just to name a few. The Gamecube is the cheapest system in its generation making it easily affordable an even if you have a Nintendo Wii which already plays Gamecube games, a true Nintendo fan should have this color Gamecube!
lorenzozarkovic (2) on 23, Sep. 2009 02:00 (HKT)
No title
Nice machine, I really like this spicy orange color.
timlim0704 (7) on 13, Mar. 2008 02:32 (HKT)
Super!
This game consle is really great!