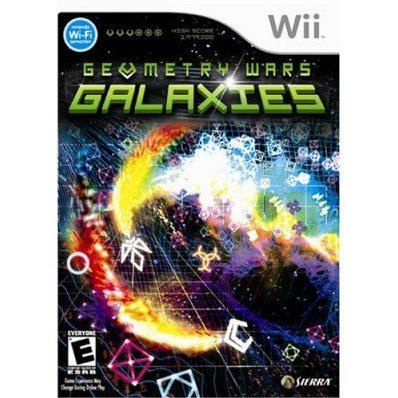 
Click on a thumbnail to see more pictures for Geometry Wars: Galaxies

Blast your way through all-new battle grids, upgrade your new Battle Drone and blast through relentless waves of enemies in the first-ever Geometry Wars single-player campaign. Then join a friend for fast-paced multiplayer that's out of this world.

If you are familiar with Geometry Wars: Galaxies, why not let others know?

[This review is based on another version of this product]
iankinnis (364) on 16, Mar. 2010 07:40 (HKT)
Geometry Wars Galaxies
this game should be bundled with all DS systems...it represents all that hand held gaming should be about..short bursts of frenetic colour,sound and energy that works as a pick up and play and best of all its FUN...just when you feel you need a 10 min blast in the arcade to liven up your reflexes and senses,put in some earphones and play this.....Superb old style shooter that still feels fresh today......BUY.......5/5
[This review is based on another version of this product]
PuNiao (365) on 08, Feb. 2008 17:49 (HKT)
Geometry Wars: Galaxies
It's amusing how some simple games have come long way. Geometry Wars was initially a hidden game in the Xbox's Project Gotham Racing 2, before being updated and sold on the Xbox Live marketplace. Now, it's been expanded even more and sold as a full-fledged game. For the uninitiated, Geometry Wars is a take on the retro shooters of old, where you control a spacecraft and blast little shapes rushing towards you. The original made use of the Xbox's dual analogue sticks on its controller to let you blast all 360 degrees around you. In the DS version, it uses a stylus and D-pad combination. Your stylus and D-pad can be used to either move your spacecraft or to shoot in a specific direction. So, why should you so much for a once-hidden game? Geometry Wars: Galaxies takes the original, endless gameplay and spreads it across a number of different worlds, each with their own original themes. At one stage, you might find huge enemies which can split into smaller enemies. Amother stage might have mine layers going about laying their mines. New to the game is your drone, which helps you blast enemies, covers your rear, and goes around collecting Geoms, the game's currency which allows you to unlock new worlds. The inclusion of your drone gives this game a fresh breath of air, as you no longer have to duke it out alone. Some may find paying full price for this game a bit much compared to the 400 points it costs on the Xbox Live marketplace, but the considerable depth of this game makes it a must-buy for hardcore fans.