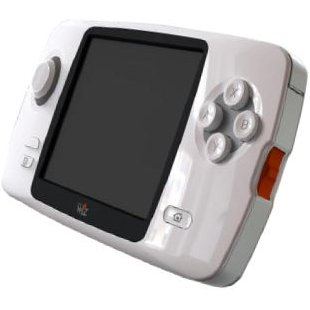 Gamepark Holding
Rated
By Our Customers

Korea
Get informed when this item is in stock by using our Personal Agent from the right.

sold Out of print / Out of stock.
Manufacturer
Gamepark Holding
Rated By Our Customers
Version

Korea
Get informed when this item is in stock by using our Personal Agent from the right.
sold Out of print / Out of stock

The Gp2x family is getting a new member this Summer: the Gp2X Caanoo.

Optimized for wireless gaming and application the Caanoo is another leap from the current Wiz system, taking open source handhelds to a new level!

If you are familiar with GP2X Caanoo Game System (white), why not let others know?

Burnmonkey (154) on 24, Feb. 2012 13:33 (HKT)
If you want a portable 16 bit emulator t his is it! If you want to run anything later this not it... For me though, I got what I paid for :)
burnmp3s (1) on 10, Jan. 2012 22:52 (HKT)
Overall a Great Handheld
First of all, I've played various handhelds and used emulators on various platforms but this was my first time buying a handheld specifically to run emulators with. So I can't directly compare this to any of the previous GPH models or other emulator handhelds out there. I've also only had the unit for a few weeks so this doesn't cover any long term issues that might exist.

The device itself is decent quality. The screen is very nice and has more than enough quality to accurately emulate older games, the plastic bezel around the screen cuts off the very edges but that is only really a problem for text that gets printed at the very top or bottom of the screen. It's also touch sensitive for using a stylus but thankfully that is not necessary for navigating the system UI, and since none of the emulated games I play are designed for a touch screen it's not really a feature I use. There are various other features that I don't use and also don't get in the way, such as the mic, USB host port (which is rare for a handheld device of any kind), and TV out. The thumbstick can be annoying in some cases where having physical buttons to tap would be better, but overall it works surprisingly well. It's much better than the bafflingly terrible thumbstick on the PSP for instance. The button layout is standard SNES-style, four face buttons and two bumpers on top, which works well for most games. My main gripe with the physical specs of the system is that it uses a non-removable battery (which is understandable) and a proprietary charging cable. The charging connector is annoying and clunky compared to the standard mini or micro USB charger port that most other handheld devices use these days, and it means you have to carry around yet another type of cable if you bring it anywhere.

Now on to the actual games. It comes with a 4GB SD card preloaded with a few non-emulated Korean games (in English), along with a few emulated arcade games (mostly shooters which show off the fact that you can play them with the screen rotated as it would have been in the arcades). None of them were really all that great although the rhythm game is somewhat fun. Obviously most people will be buying this to run emulators though, and there are decent ones for the system for most major consoles and classic computers. For Genesis/Megadrive (with PicoDrive), SNES (with DrPocketSnes), NES (with GPFCE), and Gameboy Color (with OhBoy), the compatibility is good and the majority of games run at full speed. Some of the 3D games from the later consoles don't run at full speed (Star Fox, Virtua Fighter, etc.) but that is not exactly a surprise since the old 3D chips in those games are notoriously difficult to emulate efficiently. You could probably fit full romsets of all of those consoles on the included 4GB card and have thousands of games ready to play. I also tried Gameboy Advance with GPSP and those games were more hit and miss, the sound was noticeably off in a lot of games and most of the more graphics intensive ones were not playable. And I installed Doom (via PrBoom) and some old point and click games (via SCUMMVM) and they all worked very well. There is a PSX emulator that I have not tried, but I am guessing that there are probably a lot of compatibility and speed issues for games at that level of comlexity. The emulators vary in quality and features but overall they are very solid, all of the ones I tried supported save states for instance which is very useful for playing old games that required written passwords to resume. The development community for the Caanoo is not as active as some other homebrew scenes, but with so many working emulators for consoles I don't think there is a huge need for a lot more effort on the part of developers.
GemininoKanon (3) on 01, Jan. 2012 03:52 (HKT)
Unexpectedly good !
Well, I have the canoo for about a year now, and I think I can make a judgement now...

First of all, the caanoo is very comfortable to play with, i have absolutely no complaint on this part. At first I didn't like the directional pad, but with habit I would say that it is surprisingly precise and comfy ! I had troubles with fighting games but now I dealt with it quite well.

I bought it for the sole purpose to play 8/16 bits&arcade classics, and I at this time, I am almost completely satisfied : I'm looking for a smooth emulation, zero frame (I HATE FRAMESKIP), and good sound. At the time I write this review, megadrive and neo geo emulators are the ones that fulfill at 95% my objective, without overclocking. There can be bugs or not working for some games, but this is peanuts. NES emulator is in the same range, nearly perfect.

Pc engine Nec emulator is excellent too, there are some flaws still for some games (music speed low, glitches for some games, etc). Let's say 88%.

Sadly, Super nintendo/famicom emulator has quite much to be improved. Emulation can be slow if you do not overclock the cpu to 680/700 Mhz... and no surprise, it will suck the battery big time !

MAME / Arcade / CPS2 : it will depends a lot on the game played. Overall, MAME emulator is a bit disappointing. I'm a huge fan of Street fighter II, and sadly I found this a bit too slow, even when overclocked. But a Final Burn alpha has just released in this end of 2011 year, let's hope that some arcade classics will run better

That leads me to the main issue of this caanoo, the battery. Do not expect autonomy such as the nintendo DS, if you play a lot you will be forced to charge the caanoo very often... And it will take 4 hours to reload the battery.

In conclusion, I would warmly recommend the caanoo for the 8/16 bits 90's lover, you will be very happy. For the future, I hope that an improved caanoo will be out : more powerful, better use of a removable battery, D-pad a la saturn ! ^^
Burnmonkey (154) on 18, Oct. 2011 10:10 (HKT)
Cool and stuff
If you love emulation and older games this system is AMAZING! If that's not your thing...well then it probably isn't worth it. The thumbstick actually controls well even with older games and the screen is bright and clear. Just waiting for some of the emulators to improve with time...
piyasak_c (115) on 10, Oct. 2011 09:28 (HKT)
Good
The hardware is awesome, can play many emulators and roms. However, no good NES emulator released. The one I have has a frame rate problem.
1 »