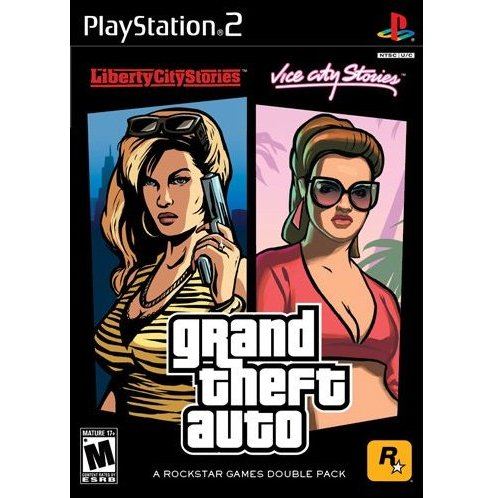 sold Out of print / Out of stock.
Manufacturer
Rockstar Games
Compatible With PlayStation 2™ (PS2™)
Version

Liberty City Stories:
There are a million stories in Liberty City. This one changes everything. Once a trusted wise guy in the Leone crime family, Toni Cipriani was forced into hiding after killing a made man. Now he's back and it's time for things to be put right.

The streets of Liberty City are in turmoil. Warring mafiosi vie for control as the town begins to self-destruct under waves of political corruption, organized crime, drug trafficking and union strikes. No one can be trusted as Toni tries to clean up the mess of the city's chaotic underworld. Deranged hit men, morally depraved tycoons, cynical politicians and his own mother stand in his way as Toni tries to bring the city under Leone control.

Forced to fight for his life in an odyssey that will shake Liberty City to its foundations, Toni must use any means necessary to secure his place in the leadership of the Leone family in a town up for grabs.

If you are familiar with Grand Theft Auto Liberty City Stories & Vice City Stories 2 Pack, why not let others know?

GTA: Liberty City Stories places you in the shoes of Toni Cipriani and you would remember the city rather well if you have been regularly playing GTA III. Interestingly, this game is quite good, despite it being a port from the PSP game. The visuals are nothing to shout about but the storyline is still enthralling enough to keep you playing more.

GTA: Vice City Stories is probably the weaker game in this package. The graphics are rather bad and the screen tears quite often probably because it was originally also made for the PSP. Still, it is a GTA game and essentially follows the same tradition of bizarre missions and outstanding humour.

Get this package now, forget how bad the graphics look (it's a last-gen system game, anyway) and just enjoy it