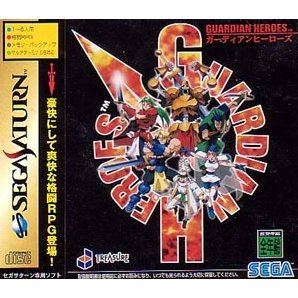 Treasure
Compatible with Sega Saturn™ (Saturn)
For JPN/Asian systems only.

sold Out of print / Out of stock.
Manufacturer
Treasure
Compatible With Sega Saturn™ (Saturn)
Version


Click on a thumbnail to see more pictures for Guardian Heroes

Treasure's unique scrolling beat-em-up/RPG hybrid, Guardian Heroes introduces the player to a motley crew of heroes (Consisting of a swordsman, a ninja, a cleric and a mage), formed to find a "legendary sword". The game begins with the heroes in a bar, having found this sword, as they decide what to do with it. Before they have a chance to come up with an idea however, they are interrupted as an Imperial General charges in and warns them they are in grave danger. Seconds later, Imperial troops swarm into the inn and the heroes are forced to take flight along with this general.The fighting mechanic is slightly deeper than the average scrolling beat-em-up, with light and heavy attacks, special moves (executed the same way you'd expect a normal beat-em-up to work), magical attacks and the ability to block. As you defeat enemies you gain experience points, with which you can upgrade your character between levels - sharing them between various factors such as strength, speed, constitution and magic resistance.Even more interesting however is the hugely branching storyline, which changes according to decisions you make (of which there are many) and which character you select to play with.Also of note is the fact that even in one-player mode there are always two of you on screen - you command the other character by changing his "mood" - aggressive, cowardly etc. - of which there are six. On top of this, it is possible to play the game as a more traditional beat-em-up with up to six players/bots, and in this mode you can play as any character that you have encountered during the main game mode.

No reviews for Guardian Heroes yet.