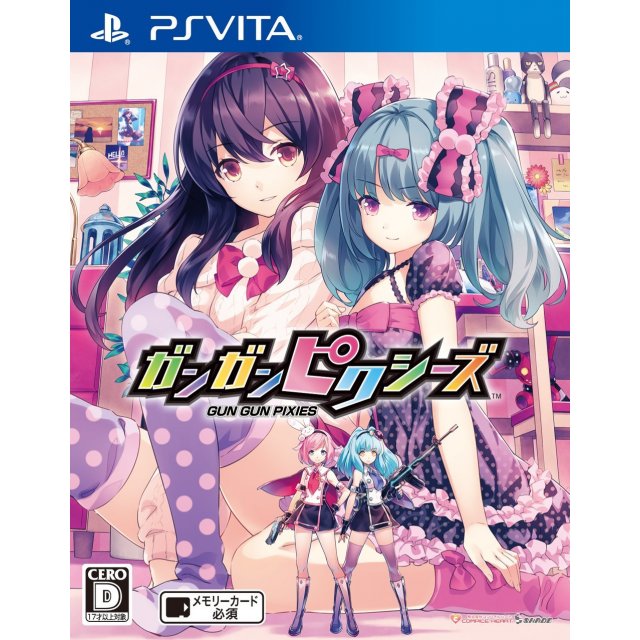 Works on all systems sold worldwide, a correct regional account may be required for online features.
24h In stock, usually ships within 24hrs.
US$47.99
Limited time offer - Secure yours now before the offer expires!
Compile Heart
Rated By Our Customers
Compatible With PlayStation Vita (PS Vita)
Version

Works on all systems sold worldwide, a correct regional account may be required for online features.
24h In stock, usually ships within 24hrs
Price
US$47.99
Limited time offer - Secure yours now before the offer expires!
Play-Asia.com Return & Refund Policy
Click on a thumbnail to see more pictures for Gun Gun Pixies

Luziano (5) on 27, Dec. 2018 05:28 (HKT)
A fun game but the camera and cheap deaths ruins the whole experience.
Don't get me wrong, the game is a blast to play but the camera ruins the whole experience especially when behind the cabinets/under the cabinets, you can die very easily when on very high places and you will have to start over every time without leaving the room and saving your progress, i'm not knocking this game down to the ground, love the game and its fan-service but the camera and cheap deaths ruin the whole experience, but try the game and support so Compile Heart and SHADE can make a sequel or port it to PC with improved camera controls.
leon.fofis (34) on 02, Nov. 2018 21:03 (HKT)
Simple and addicted
This game is this as revealed but the mechanics are simple and the gameplay doesn't require much to have fun.
Caesar (36) on 22, Oct. 2018 10:53 (HKT)
You shoudn't expect that much
This is not a contender for the game of the year, it didn't even was published outside of japan, and yet it is a plain good game, why? because it doesn't make a promise it can't keep, it is what it is, a dumb old game with a lot of fanservice, it is so much better than senran kagura, at least on the vita, the clunky controls make you suffer more than it should but that adds some variety to the gamplay, at least as far as i've played (around 6 hours), if you don't care to "waste" your time numbing yourself for a while (and you get it cheap), you should get this game
keiji_nanjo (67) on 13, Oct. 2018 20:38 (HKT)
Shade has done it again...
After Bullet Girls, Shade has taken military action and fanservice to a different level with this game. Since it was developed with Compile Heart, Neptune and Noire are even featured as guest characters.

Though the platforming is a little treacherous, the service volume is quite high and the seemingly expensive upgrades can be gained quickly when you get the hang of things. Overall, a must-try for Bullet Girls fans.
talalkilldarthvader22.yoda121 (1) on 29, Aug. 2018 00:12 (HKT)
love this game
i like kind this game . i wish more game like this
1 »