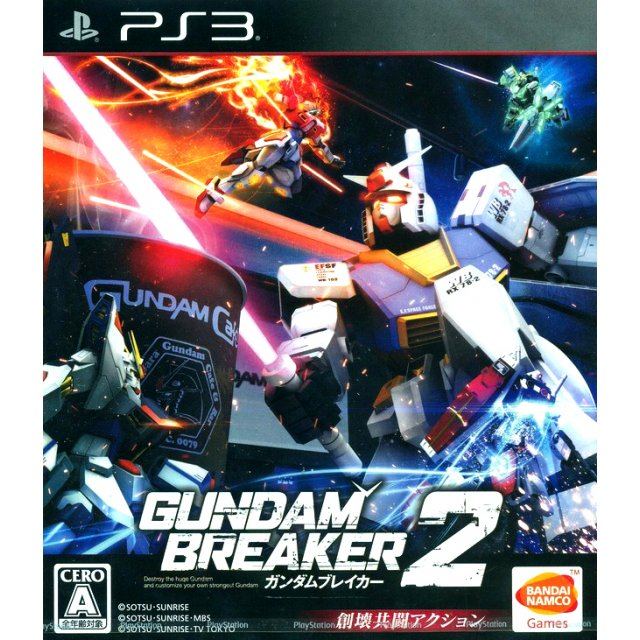 Works on all systems sold worldwide, a correct regional account may be required for online features.
1w Expected stock arrival within 1 week.
US$57.99
Our previous price:US$ 69.99
You save: US$ 12.00( 17% )
Manufacturer
Bandai Namco Games
Rated By Our Customers
1w Expected stock arrival within 1 week
Price
US$57.99
Our previous price:
US$ 69.99
You save:
US$ 12.00( 17% )
Play-Asia.com Return & Refund Policy
Click on a thumbnail to see more pictures for Gundam Breaker 2

Gundam Breaker isso appealing to Gundam fans because it reallycaptures the feeling ofbuilding YOUR dreamGunpla in-game, earning and using parts from existing real life Gunpla kits!Bandai Namco have even stepped up the 'Build-A-Gundam' features in thissequelby adding 100 different pieces for each slot (head, arms, legs, body, etc.) which will ultimately allow up to 10,000,000,000 (yes, BILLION)kitbashingcombinations. The only thing stopping you from putting GPB-04B BEARGGUY's head on every Gundam is your own imagination. What you equip isn't solely aesthetic either and can affect your performance greatly, as well as add abilities.

Gundam Breaker gameplay and combat ismodeledafter traditional hack n' slash games andGundam Breaker 2looks like it will adopt many of the same features from the previous title,with improvements to make combat more fluid and fast.Gameplay types were divided into five different missioncategories, and should see a return inGundam Breaker 2: Normal, Defend, Survival, Team Battle, and Arena Gain. Normal mode has players fight through different stages with a respawn mechanic, while Survival is similar but ends when your HP reaches zero. Defend has players defend a certain point against an onslaught of enemies. Team and Arena allow multiple players to team up.

One of the exciting places you'll be doing battle is a brand new stage modeled after the 'Gundam Cafe' in Akihabara, Tokyo where players will fight on the tabletops of the famous Gundam eatery.

If you are familiar with Gundam Breaker 2, why not let others know?

As a gamer with zero knowledge in Japanese, and the help of translation guides and a love for Gundam, I spent hundred of hours playing through this game, enjoying every single minute of it.

First improvements, it is much easier to acquire new suits, and there's twice as many suits as the first game giving everyone the likelihood of playing with their favorite suit. And if there's a particular suit you fancy, you can stick with it throughout the game by continually upgrading your suit, and it's not that hard to find the parts you need for upgrading. Of course, rare weapon CAD can be a pain to find, but man is it that fun to replay through the varied set of objectives each mission offer, from defending nodes to capturing areas before finally facing off a giant gundam.

The varieties of enemies you fight is great too, compared to the first game. No more palette-swapped doms, this time around, grunts from Gundam 00, Gundam F91 etc ... make a lot of appearances

Oh and the story is quite fun too, yeah, there's a story in it this time :)

I can't wait to see how much improvement they will have for Gundam Breaker 3
Prinny (7) on 17, Oct. 2015 02:01 (HKT)
Great improvement over the original.
Comparing this to the original a lot has improved not just mission wise but also customization wise. Gone are the days where you had to grind for the chance to get a high star part. A lot more builds are actually useable later in the game and the game is as harsh later on.
wezley.thompson (1) on 01, Mar. 2015 23:18 (HKT)
Fantastic
Great game, hours of fun solo or with friends, best Gundam game in years
Jackyjoe (1) on 15, Feb. 2015 11:13 (HKT)
Great fun
It's a great game and I'm very happy with what they've done to update it from the original. Can't wait to sink my first 100 hours into it just like GB
1 »