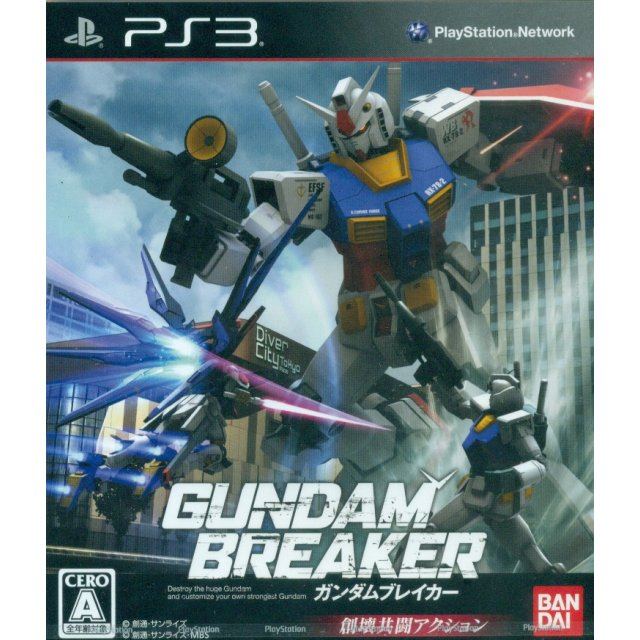 Works on all systems sold worldwide, a correct regional account may be required for online features.
24h In stock, usually ships within 24hrs. (Only 1 left in stock.)
US$13.99
Limited time offer - Secure yours now before the offer expires!

Manufacturer
Bandai Namco Games
Rated By Our Customers
24h In stock, usually ships within 24hrs
(Only 1 left in stock.)
Price
US$13.99
Our previous price:
US$ 19.99
You save:
US$ 6.00( 30% )
Play-Asia.com Return & Refund Policy
Trustpilot
Trustpilot
Click on a thumbnail to see more pictures for Gundam Breaker

Gundam Breaker lets players customize their own Gundam models and then pilot them in battles against other models of all different sizes in real world locations. The title could easily be described as a Dynasty Warriors-style hack and slash with tons of customizable options. As you battle other models, you can gain their parts and become stronger yourself - which means you can fight your favorite enemies from the Gundam anime and take their power!Since both PS3 and Vita use the same online world you can have the same game experience on the platform of your choice.

Mobile Suit Gundam: Extreme VS (Playstation 3 the Best)
US$ 9.99

If you are familiar with Gundam Breaker, why not let others know?

WulfOX (13) on 30, Sep. 2017 16:41 (HKT)
Gundam Game!
builds, action-game, etc, it's very good game and gundam game!
Demon12349 (1) on 14, Dec. 2014 23:18 (HKT)
Great Game
Even though the game maybe in Japanese there are some parts of the game that are in English which is nice. Gameplay is fun I'll never get bored with it not sure about anyone else it's like a hack and slash if you had to define what type it was.
randante (20) on 19, Mar. 2014 10:26 (HKT)
It's a LEGO Gundam!!
Amazing games!! it's better than any other lego games!! It let you combine parts from every gundam that you could think of! Combining master gundam head + wing zero backpacks + 00 Raiser arm + Freedom leg is absurd in the past, but now it's DOABLE!!! PERFECTTTOO!!!
niwatorigagotoku (4) on 17, Feb. 2014 19:04 (HKT)
Phantasy Star Online but with Gundam
it's not the most complicated game but as far as the fun factor goes, this is one of the most fun and simple games around. The game plays kind of like Phantasy Star Online, where you enter levels and have to clear them, usually just getting to the end and fighting boss suits, which are almost always the main Gundam or the villain of a series.
And you can get parts and make your own custom suits based on parts from actual suits and while there are limitations on what you can build, you can pretty much make what you want with the parts given to you. Want to make a Zaku II with parts of Turn A? Want to splice the classic Nu with Hi-Nu? Just want to recreate your favorite suit and use it? You can. You can even do some of the signature attacks like the God Finger.
Game also has multiplayer and it's fun.
Good game, worth buying.
rebus.22 (63) on 27, Dec. 2013 19:54 (HKT)
Must get them all!
Great combat and so many different part to let you make your own custom gunpla.
1 »