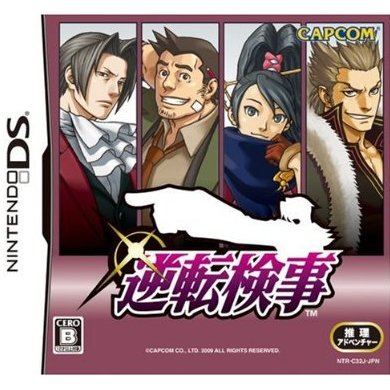 You have seen things in the lawyers' point of view, what about the persecutor's? As one of the strongest opponents you have to defeat during the court battles, Mitsurugi is both intriguing and frustrating. Find proof and culprit to cases that you are enlisted to solve.Control Mitsurugi during the investigation and look for dubious spots in a crime scene, from the prosecutor's office to the an airplane compartment, there are lots of places you have to explore to catch a murderer. Line up the points you gathered about a case and use your logic. Engage in a duel with the people related to the crime scene and catch the discrepancy in their verdict, give them a shake or a jab with words to extract the truth.Like all lawyers, you have your own cute sidekick. Mikumo, the self proclaimed thief is planning to steal the treasure, “truth”, but feel free to cooperate with her. She has a simulator that gives you some idea as to what happened specifically during a crime scene, so gather information with it during investigations.

If you are familiar with Gyakuten Kenji, why not let others know?

umimi (2) on 30, Sep. 2009 01:44 (HKT)
Attention: No English language option on this one. (JP version)
No English language option on this one unlike the first three import of the main series. That said, the game itself is very much in mold of Ace Attorney flow. The decision to make player directly move character like RPG is a nice touch that is a diversion from the main series, often it feels like moving a character in well designed doll house. Only gripe sometime the clue just seems like part of the backdrop, player is usually restricted in certain area(s) so chances of getting stuck is not too terrible if every object is checked in the game.
Overall if you’re a fan of the series it’s a great side story.
[This review is based on another version of this product]
backslashio (17) on 29, Jul. 2009 14:08 (HKT)
Nice packaging let down by some factors
Whilst the game itself is probably awesome (I can't read japanese and there's no english version included - doesn't stop me from trying to play it!) the packaging is let down by some factors,
1. Its way overpriced, shouldn't be more than US$100 no matter how limited it is.
2. The DS card holder WILL NOT fit any DS cartidges! Not in mine, there's next to no leverage to make a gap big enough to slip it in there unless you want to risk tearing it - what I have to show for it is just a leather case with no usage.

That said, the soundtrack included is awesome although it should've included the original orchestra soundtrack (there's only 5 audio tracks and 7 video tracks). The booklet is 16 pages long, mostly Q&A, profiles from the ppl who made it and a 2 page comic + some coloured artwork - no sketches tho. The 3 artcards are quite nice but nothing out of ordinary