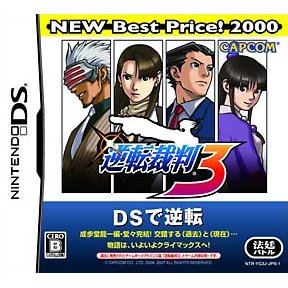 Works on all systems sold worldwide, a correct regional account may be required for online features.
24h In stock, usually ships within 24hrs.
US$36.99
Our previous price:US$ 44.99
You save: US$ 8.00( 18% )
Manufacturer
Capcom
Rated By Our Customers
Compatible With Nintendo DS™ (NDS™)
Version

Works on all systems sold worldwide, a correct regional account may be required for online features.
24h In stock, usually ships within 24hrs
Price
US$36.99
Our previous price:
US$ 44.99
You save:
US$ 8.00( 18% )
Play-Asia.com Return & Refund Policy
Click on a thumbnail to see more pictures for Gyakuten Saiban 3 (New Best Price! 2000) / Phoenix Wright: Ace Attorney Trials and Tribulations

In Phoenix Wright: Ace Attorney Trials and Tribulations, players star as a defense attorney who must prove a seemingly guilty client’s innocence no matter how dire the circumstances may seem.Phoenix will face the toughest prosecutor yet as the mysterious hard-boiled “Godot” will try to take him down at any cost. The complete story of Phoenix Wright comes together as truths are revealed in twisting storylines and intriguing gameplay. Players must collect evidence, survey crime scenes, weed through inconsistent testimonies, and overcome corrupt agendas to ensure that justice prevails.With the return of the popular “psyche-lock” interrogation tool from the Phoenix Wright: Ace Attorney Justice For All , players will have to overcome even more intense courtroom standoffs in order to close the case.Phoenix Wright: Ace Attorney and its sequel were clever and suspenseful, with plenty more twists and turns than a dirt road across the Himalayas. Expect more of the same high drama in Trials and Tribulations!

If you are familiar with Gyakuten Saiban 3 (New Best Price! 2000) / Phoenix Wright: Ace Attorney Trials and Tribulations, why not let others know?

From playing as Chihiro (Mia) to taking on Ryuichi's (Phoenix's) doppelganger, the game is loaded with comedy, thrills and even the odd moments of silence. The gameplay may be essentially the same as the other two games, but that's fine. There's no need to fix it if it's not broken after all.