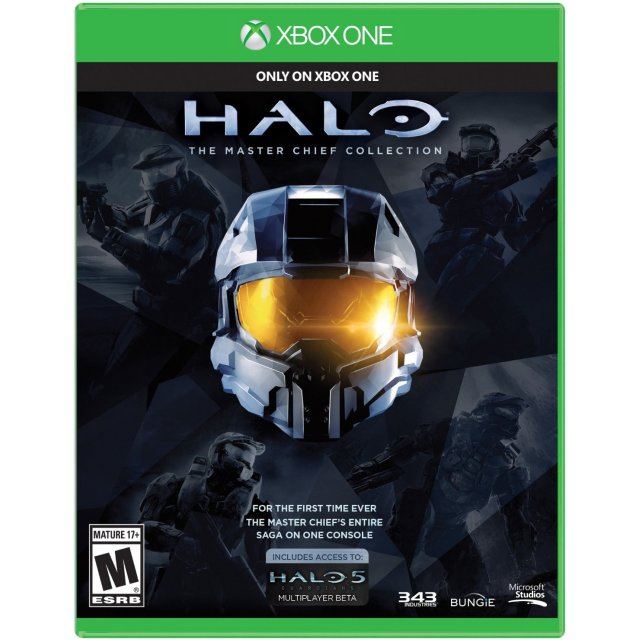 Works on all systems sold worldwide, a correct regional account may be required for online features.
24h In stock, usually ships within 24hrs.
US$38.99
Our previous price:US$ 59.99
You save: US$ 21.00( 35% )
Manufacturer
Microsoft
Compatible With Xbox One™ (XONE™)
Version

Works on all systems sold worldwide, a correct regional account may be required for online features.
24h In stock, usually ships within 24hrs
Price
US$38.99
Our previous price:
US$ 59.99
You save:
US$ 21.00( 35% )
Play-Asia.com Return & Refund Policy
Trustpilot
Trustpilot
Click on a thumbnail to see more pictures for Halo: The Master Chief Collection

In a salute to fans, Master Chief's entire story is finally available on one system!The Master Chief Collectionwill be featuring a beautifully re-mastered Halo 2: Anniversary, along withHalo: Combat Evolved Anniversary,Halo 3, and Halo 4, the new digital seriesHalo: Nightfall, and access to theHalo 5: Guardians Beta--seriously guys, this is the full Halo experience.

It seems Microsoft and 343 Industries' goal withMCCis to familiarize new players with the expansive story in preparation forHalo 5'srelease, but they are doing so much more than just upgrading some textures.Halo 2willhave extra narrative points scattered throughout the game, a sort of breadcrumb trail left by the developers to give players a deeper and more detailed understanding of the Arbiter.Blur Studiois also creating a narrative for the prologue and epilogue of theMaster Chief Collectionas well as roughly 50 minutes of cinematics; designed for those who haven't delved into the franchise'svast amounts of expanded fiction.

Returning veterans (all players, really) will enjoy the fact thatevery campaign mission from every game is unlocked from the start!This gives343 Industries the chance to introduce curated playlists that allows you to jump around the best moments from all four games' campaigns back to back.

Like it's predecessor you will be able to instantly switch between old and new graphics, and when theysay instantly theymean it. There is no pause when you make the swap, in fact the live demo during the presentation showed the player jumping back and forth between the two, in the middle of battle, with no technical reprecussions.

The Halo love doesn't slow down there: every map that's ever shipped for aHalogame is included in the MCC, that even includes maps that wereexclusive to PC ports of the first two titles. Six of Halo 2's classic maps have received a complete graphicaloverhaul.

If you are familiar with Halo: The Master Chief Collection, why not let others know?

comfef (25) on 05, Dec. 2018 07:24 (HKT)
the maximum
excellent collection, very good remastering.
hours and hours of action, highly recommended.
rko1983viper (62) on 17, Jun. 2016 13:18 (HKT)
Legends of master chief in one package.
If u own xbox one, theres no reason not to own this. Pls give this game a try, its too awesome to be true. From all the great story/gameplay campaign and to all competitive/fun multiplayer maps. Lots of content in this package and there will be something for you to enjoy. Every halo game feels so distinctive yet every game retained that halo feel to it. The updates of each game to 1080p and 60fps made this collection the definitive version of each halo game. I absolutely love this collection. Thx play-asia.
[This review is based on another version of this product]
jiwen11 (45) on 19, Nov. 2015 23:45 (HKT)
No title
Excellent Game. Value for money!
coldice (266) on 26, Nov. 2014 19:13 (HKT)
Good value package... but...
Great package with 4 Halo games from 1 to 4. However as of now the multiplayer experience is broken at best.