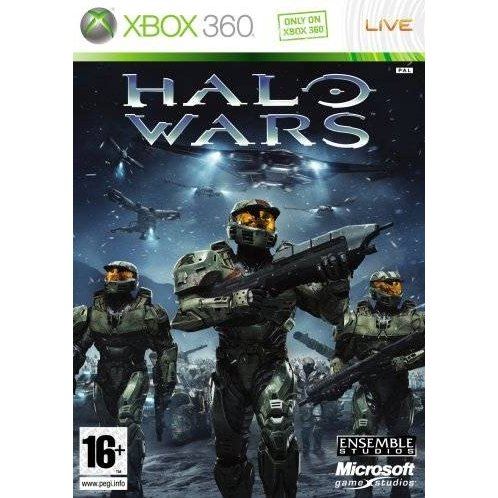 
Click on a thumbnail to see more pictures for Halo Wars

Halo Wars is an exciting strategy game based on the legendary Halo® universe. In campaign mode, command the armies of the UNSC warship Spirit of Fire, with familiar and new UNSC units in its initial encounters against the Covenant, an alien coalition threatening to obliterate mankind. Halo Wars will immerses you in an early period of the storied Halo universe, allowing you to experience events leading up to the first Halo title for Xbox®.With the guidance of Serina, a spirited artificial intelligence (A.I.) persona, direct legions of UNSC soldiers, Warthogs, Scorpions, and more, each group having its own strengths and uses in battle. Adventurous commanders can also call upon ancient Forerunner technology, if they are fortunate enough to find it hidden throughout the battlefield.Covenant forces are also waiting for you to lead them into battle in multiplayer skirmishes via the New Xbox Experience. Call upon an arsenal of new and familiar Covenant units such as Grunts, Elites, Ghosts, and even Scarabs to defeat foes on the battlefield. Strategic-minded players who react well under pressure will emerge victorious.

If you are familiar with Halo Wars, why not let others know?

[This review is based on another version of this product]
peter.ppatrici (153) on 12, Mar. 2011 00:24 (HKT)
Nice RTS for the XBox
Halo wars is specifically designed for the console and thus you don't feel any difficulty playing it on a console unlike many other RTS which is designed for the PC and ported to the console. The game is also easy to pickup and is excellent to new player of RTS. The limited edition also comes with halo 3 maps , a graphic novel , a spirit of fire patch , trading cards and an in-game vehicle. A really good buy for so much goodies!!
[This review is based on another version of this product]
coffeetea (63) on 25, Feb. 2011 00:37 (HKT)
love it!
never thought RTS can play so well on a console. RTS has never been my cup of tea on a console. But this is the first that change my opinion. Esemble Studio did a great job on this one. It's a bummer that this is their last game. But nonetheless its a great game. Truly made for halo fans. Even for a newcomer of RTS, I would recommend this
[This review is based on another version of this product]
cwnsalgado (96) on 10, Nov. 2010 23:03 (HKT)
Great Game!
Very good! I recommend it.