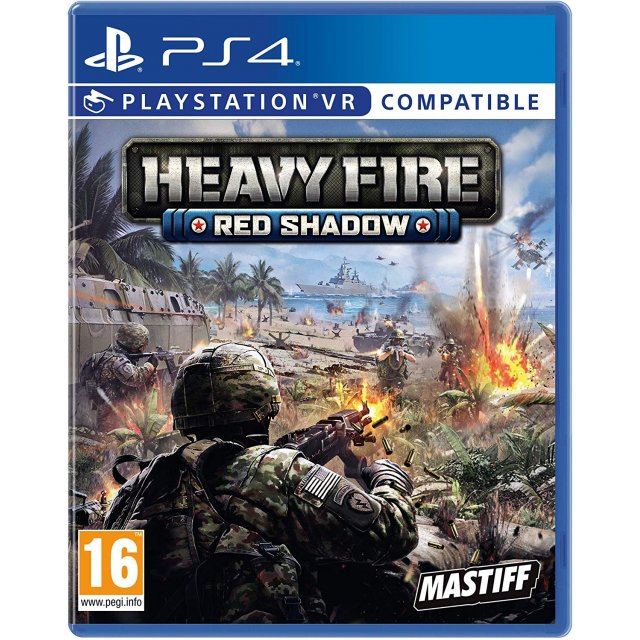 Works on all systems sold worldwide, a correct regional account may be required for online features.
1-2w Expected stock arrival within 1-2 weeks.
US$39.99
Our previous price:US$ 49.99
You save: US$ 10.00( 20% )
Manufacturer
Mastiff
Compatible With PlayStation 4™, PlayStation VR™
Version

Works on all systems sold worldwide, a correct regional account may be required for online features.
1-2w Expected stock arrival within 1-2 weeks
Price
US$39.99
Our previous price:
US$ 49.99
You save:
US$ 10.00( 20% )
Play-Asia.com Return & Refund Policy
Trustpilot
Trustpilot
Click on a thumbnail to see more pictures for Heavy Fire: Red Shadow

Set in the not-so-distant future, the tension between a bold North Korea and the United States have gone beyond their breaking point.

In Heavy Fire: Red Shadow players lace themselves up in the tattered combat boots of Sgt. Will, who narrowly survived a North Korean missile attack on Guam designed to knock out its defenses, and now finds himself almost single-handedly trying to repulse a large-scale North Korean raid.

Step onto the unforgiving battlefield, establish a beachhead, and holdfast behind a turret-mounted machine gun. A brutal and unceasing onslaught of enemy forces will attempt to flank and eliminate Sgt. Will from every angle as he and a few surviving comrades rain hell upon anything that crosses their sights.

No reviews for Heavy Fire: Red Shadow yet.