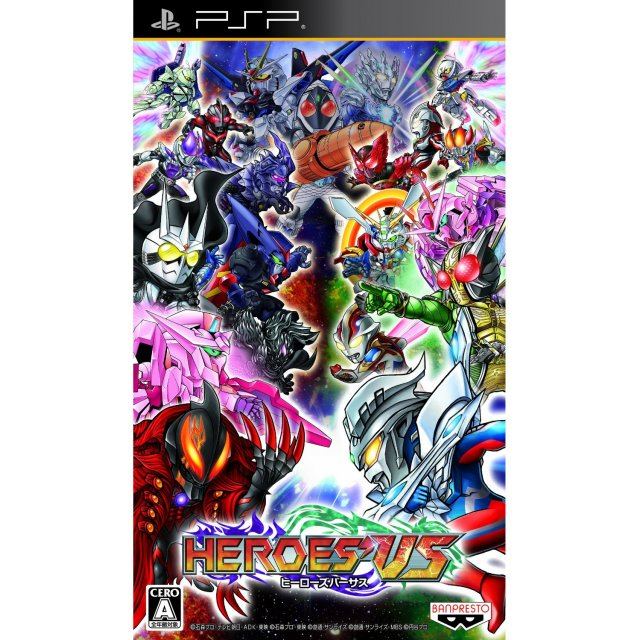 Works on all systems sold worldwide, a correct regional account may be required for online features.
1w Expected stock arrival within 1 week.
US$19.99
Our previous price:US$ 22.99
You save: US$ 3.00( 13% )
Manufacturer
Bandai Namco Games
1w Expected stock arrival within 1 week
Price
US$19.99
Our previous price:
US$ 22.99
You save:
US$ 3.00( 13% )
Play-Asia.com Return & Refund Policy
Trustpilot
Trustpilot
Click on a thumbnail to see more pictures for Heroes VS

Kamen Riders, Ultramen and Gundams live in different worlds and they are not supposed to interact, however, one day, a strange being called Stragaia appeared and present them with visions. To the defenders of justice, he shows them that the clash of the three worlds will bring a huge calamity, to the villains, he shows them that the event will bring them huge power. The defenders and the villains have equal powers, and during the fight, they will usurp each other's Spirit Points. Learn powerful finishing moves and defeat your enemies with an extravagant style.

If you are familiar with Heroes VS, why not let others know?

sonorityoflife (38) on 02, Aug. 2015 10:31 (HKT)
Really fun and over-the-top
The game starts with a cool intro full of action with a great theme song. You play as either a Kamen Rider, an Ultraman or a Gundam.

You move through a map to advance to the next mission. The battles are action-based, and you set a deck of cards in order to have power ups for a limited time. You build up SP by hitting your opponent. Once at 50%, you can unleash a special attack. At 100%, you can activate Finish Mode by using the Hero Card from your deck.

Really fun fighting game! Highly recommended.
www.cliffkemble (1) on 21, Dec. 2014 12:59 (HKT)
No title
Wow,I didn't even realise that this game is playable in PSP.I thought that i would be only invented for even modern technology like PS3 or PS4.It amazed me and even suprised me.So,I recommend you guys to buy this game.Its very cheap and worth it.
outerheaven (138) on 19, Dec. 2014 02:04 (HKT)
All the heroes in 1!
If u like Ultraman, karmen riders or Gundam? You will love this all-stars fighting game!
wuzzi (138) on 07, Oct. 2013 20:30 (HKT)
No title
This is like Dissedia Final Fantasy games and Super Smash Bros. but for robots ! this game surprised me and I'm surprised no one reviewed it here ! people should get this game ! its one of the best PSP mecha games out there !