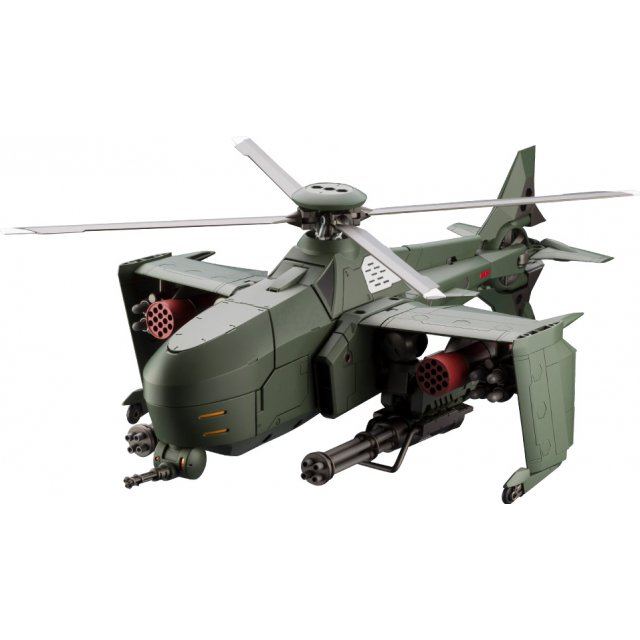 Japan
closed Pre-orders closed. Expected to ship: Sep 30, 2020
Please take note that, once purchased, this item must be paid immediately and cannot be cancelled or returned.
Manufacturer
Kotobukiya
Version

In search of the crystal furnace that caused the long-running business conflict and the enormous value it creates, people ignored the warning of environmental management AI and continued to produce hexagrams as they desire. The world's largest military-industrial complex, MSG, who felt that it was necessary to end the conflict early against the ever-accelerating pollution of the earth, began developing Hexa Gear with a new concept as a way to break the battle. The completed new model is the "early model", which is a "rotary-wing machine type with power replaced by hexagram", which is similar to the first generation, and the "late model" with a system conversion mechanism added to the human model. The two are very similar in appearance, but their characteristics are very different.

The early-stage model has no major features other than the fact that it was already disappearing from all over the world at that time, but it has a high variety of live weapons options including two 20mm Gatling guns as standard specifications. It boasts reliability and ground attack capability, and its combination with the characteristic of attacking from the sky is a huge advantage over all second-generation Hexa Gear at the time based on vehicles and bipedal walking.

In addition to this, in the latter-stage type, the BMI added to the operating system and the extremely quick replacement of firearms by the working limbs, the transportation of materials, and the versatility to perform suppression battles on the ground by the variable mechanism have also become 2.5 generation type It is classified as a hexagear. However, it can be said that the production cost of the airframe was enlarged to the size of several bulk arms α, and it was a high-cost airframe that was apparent from the perspective of the entire second-generation hexagear. In terms of operation, the delicate maintenance of the aircraft and frequent ammunition supply are not things that the board governor can handle, and it goes without saying that the presence of various ground support units with advanced technology was essential. In addition, in order to fully demonstrate its flight performance, a considerable number of hexagrams are required only by the power of the main rotor, which is more than ten times that of other second-generation hexagears. This comes at the price of a specification that allows even heavy goods and even the hexagear to be transported by air. As a result of focusing on, there were also units that dared to select and operate the previous model.

The effect of the Steel Rain troops on the front line was stable and high, and it was evaluated that the results were well worth the cost even in the later years, but it is necessary to continue to respond to this large resource load to save huge capital. Even the proud MSG of the time wasn't easy. Under such circumstances, this machine still has a joke that it was thrown out of the base immediately after it was thrown into a tight front and dramatically advanced like a storm, but it was seen from the confronting side. In some cases, it was handed down as the Hexagia that scared most people at the time.

Please note that there is a possibility that our ordered quantity will be cut by the supplier.

No reviews for Hexa Gear 1/24 Scale Model Kit: Steelrain yet.