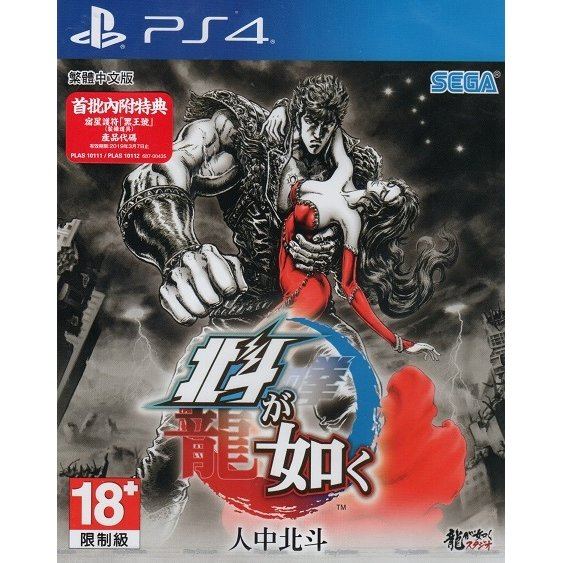 Year 199X, the world has been ruined by nuclear war, but humanity has survived. Centuries of civilizations are ruined forever, in this new savage era, only the strongest have access to food, water, and resources to live a little better life. In this world dominated by violence and mistreatment, there’s a place called Eden, also known as “the city of miracles”. This city is full of energy and water which is provided by a giant building, and this means that its citizens can live a relaxed life compared with the other people…

One day, Kenshiro, the savior of the century's end, and 64th successor of Hokuto Shinken – an ancient martial art which uses the opponent’s hidden meridian points – arrives in Eden to find his long-lost love Yuria.
What destiny awaits them in Eden? Discover it withHokuto ga Gotokufor PlayStation 4, developed by Toshiro Nagoshi, this new adventure game melt seamlessly the luxurious gameplay mechanics of "Yakuza" series with the exciting world of "Hokuto no Ken", the worldwide beloved manga series written by Buronson and drawn by Tetsuo Hara.

If you are familiar with Hokuto ga Gotoku (Chinese Subs), why not let others know?

kenny (2) on 10, Apr. 2018 21:41 (HKT)
Neat game for fans of the Yakuza series
This is a fun game and worth importing if you like other games in the Yakuza series. I am playing the game with a translation guide and decided to get the Chinese version because it is cheaper. Biggest complaint is that some of the boss fights are really tough as they jump around a lot and make you lose track of them with the camera. 1080p/60 on a regular PS4, has some sort of Pro support but I cannot say what changes are made as I do not have a Pro.