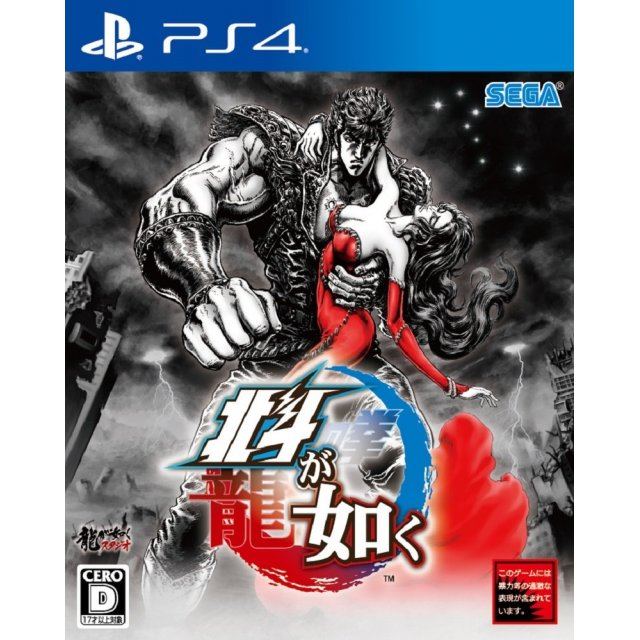 Works on all systems sold worldwide, a correct regional account may be required for online features.
1w Expected stock arrival within 1 week.
US$31.99
Our previous price:US$ 75.99
You save: US$ 44.00( 58% )
Manufacturer
Sega
1w Expected stock arrival within 1 week
Price
US$31.99
Our previous price:
US$ 75.99
You save:
US$ 44.00( 58% )
Play-Asia.com Return & Refund Policy
Trustpilot
Trustpilot
Click on a thumbnail to see more pictures for Hokuto ga Gotoku

Year 199X, the world has been ruined by nuclear war, but humanity has survived. Centuries of civilizations are ruined forever, in this new savage era, only the strongest have access to food, water, and resources to live a little better life. In this world dominated by violence and mistreatment, there’s a place called Eden, also known as “the city of miracles”. This city is full of energy and water which is provided by a giant building, and this means that its citizens can live a relaxed life compared with the other people…

One day, Kenshiro, the savior of the century's end, and 64th successor of Hokuto Shinken – an ancient martial art which uses the opponent’s hidden meridian points – arrives in Eden to find his long-lost love Yuria.
What destiny awaits them in Eden? Discover it with Hokuto ga Gotoku for PlayStation 4, developed by Toshiro Nagoshi, this new adventure game melt seamlessly the luxurious gameplay mechanics of "Yakuza" series with the exciting world of "Hokuto no Ken", the worldwide beloved manga series written by Buronson and drawn by Tetsuo Hara.

If you are familiar with Hokuto ga Gotoku, why not let others know?

pirata11111 (9) on 22, Apr. 2018 09:06 (HKT)
i recommended!
its the only game for ps4 of ken saga at the moment, the game is good, not same like as kens rage old gen ps3/360 and based/style yakuza's world gameplay, not online support but is long gameplay off line too, i play on japanese language because for pal version is TBA, i little understand but no problem, i order with economy ship and back me after 35 days, in the end i recommended for ken fans!
happy_love1982 (4) on 30, Mar. 2018 14:39 (HKT)
So much fun!
Even though I don't understand what they are saying it is still amazing. A ton of stuff to do. I sometimes get a little lost when there is no marker but translator comes in handy.
Top game! Really loving it :D and it was shipped SO QUICKLY!!!