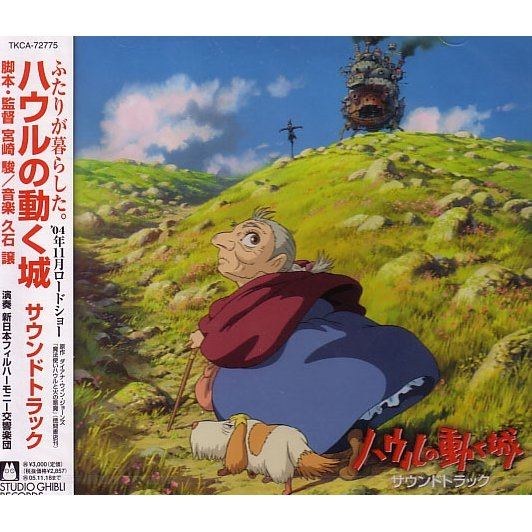 The book by British author Diana Wynne Jones, "Howl's Moving Castle" has been turned into a brand new animated film by none other than Studio Ghibli's Hayao Miyazaki himself. Three years since the critical and commercial hit of "Spirited Away," the anticipation has grown to monumental levels as millions of people worldwide wait to experience the visionary filmmaker's next outing. Japan's November premiere of this long-awaited film is already guaranteed to be the cinematic event of the year. The album contains the original soundtrack music to the movie, including the main theme "Sekai no Yakusoku," written by Youmi Kimura, arranged by Joe Hisaishi, with vocals performed by acclaimed actress Chieko Baisho who plays the film's heroine, Sophie.

Spirited Away Original Soundtrack
US$ 28.99

Tonari No Totoro Original Soundtrack
US$ 23.99

If you are familiar with Howl's Moving Castle Original Soundtrack, why not let others know?

inuonlyone (29) on 23, Feb. 2011 12:36 (HKT)
Breathtaking
This has been one of the best purchases I've made in the new year. The tracks are all masterfully conducted, and very original. And coming from my all time favourite Hayao Miyazaki movie? SOLD!

It's a masterpiece, it doesn't matter if you're a fan or not (my mom loves it), I reccomend it.
PuNiao (365) on 13, Jul. 2006 20:18 (HKT)
Howl\'s Moving Castle - OST
It is another triumph for Joe Hisaishi as his latest collaboration with Hayao Miyazaki results in a lush, grand yet also thoughtful score for Howl\'s Moving Castle. Reminiscent of early 19th century European musical influences, the creation of this orchestral delight beautifully captures the movie\'s imagery and themes. Although some may find a repetitive musical theme throughout the score, it is the talent of the artist that prevents it from dulling the impact. With its variations and tempo differences, the score maintains its evocative freshness.

A particular favoured track is \'A Stroll in the Sky\' where the music recalls Sophie\'s surprise turning to delight as she literally walks on air with Howl. Light and tempting, its tune delights the senses as if bringing one to be in Sophie\'s place stepping through the air. The final track is the vocals sung by Chieko Basho \'The Merry Go Round of Life\'. It is an apt title in that it sums up Sophie\'s journey from youth to age and returning back to youth while retaining the wisdom of old. Indeed, fans of the Miyazaki-Hisaishi collaboration would celebrate at having another masterpiece added to their collection.