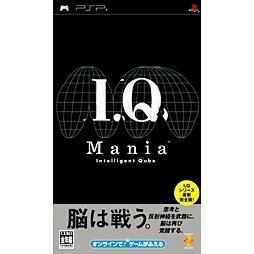 The final edition of the I.Q. series, which is very popular due to its simple operation and yet deep game content, is finally making its debut on the PSP™! This time, more than 7000 stages selected from the 3 games in the series, along with many original challenges and a linked multiplayer mode, will surely open up a professional and true I.Q. fervent world.

If you are familiar with I.Q. Mania, why not let others know?

The PSP game retains all the original music tracks from the PS1 game, *and* includes lots of new tracks that seem to have been from the same recording session! Some really great numbers in here, for sure. Adds to it nicely! Fits right in.
The PSP game has a different voice actor making the calls. Initially this may irk some purists who wish the PS1 voice actor had been used, but he does the job just fine. Getting over the set number of moves has him call out, "Great!" Getting the exact amount of moves brings, "Perrrrrfect!" And getting less than the move number has him say, "Excellent!" Kinda cool after a while, actually.
The PSP game has some nice options. You can adjust both the music and SFX volume, you can change the control scheme to the PS1 version's scheme if you like, and (I think is way cool) you can turn off the indicator mark without speeding up the cube march!
Lastly, this PSP edition's "Normal" mode is slower than the '0' default setting of difficulty for the PS1 release, which makes it a little more accessible to those who aren't experts... like me.