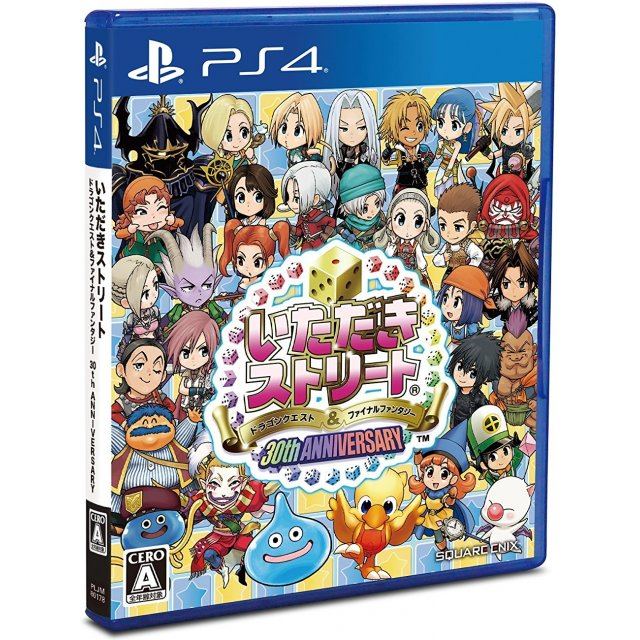 Works on all systems sold worldwide, a correct regional account may be required for online features.
24h In stock, usually ships within 24hrs. (Only 1 left in stock.)
US$74.99
Limited time offer - Secure yours now before the offer expires!

Manufacturer
Square Enix
24h In stock, usually ships within 24hrs
(Only 1 left in stock.)
Price
US$74.99
Our previous price:
US$ 75.99
You save:
US$ 1.00( 1% )
Play-Asia.com Return & Refund Policy
Click on a thumbnail to see more pictures for Itadaki Street Dragon Quest & Final Fantasy 30th Anniversary

Disney Classic Games: Aladdin and the Lion King
US$ 29.99

gamingyoshi862 (1) on 29, Nov. 2017 10:52 (HKT)
A Good, Yet Familiar, Time
Itadaki Street 30th Anniversary doesn't change up the formula too much, which makes sense for a title celebrating an anniversary. Move along a board, collect property and stock, listen to commentary from Dragon Quest and Final Fantasy characters, and try to beat everyone else to the bank. Most of the boards are brought back from previous games as well. Truthfully, some players might be miffed at the lack of new content in this title.

This is a hard sell if you recently played the PSP or Wii version of the game. Yet if you never played the series before or if you're a diehard fan, you'll have quite a bit of fun with this one.
[This review is based on another version of this product]
Ankh4 (3) on 17, Nov. 2017 06:12 (HKT)
Vita Version is Great as Well!
I left a (slightly) more detailed review for the PS4 version, but the Vita version is virtually identical! (Albeit with a slower frame rate and without some of the details and nuances here and there on the PS4)

Again, this game is HIGHLY recommended! Very cute on the Vita!
Ankh4 (3) on 17, Nov. 2017 06:05 (HKT)
Highly Recommended!
True, this game is seems to be just a hybrid of Itadaki Street Special (PS2) and Itadaki Street Portable (PSP), albeit with some different characters and updated graphics... But these previous entries were fantastic! I am glad to finally be able to play the latest iteration in the series!

More of the same, but this is Itadaki Street through and through... I HIGHLY recommend it. Pick this one up!
biohazardmaster (1) on 10, Nov. 2017 19:50 (HKT)
itadaki street ps4
Very happy to finally can play this ps4 version of itadaki street! a bit disapointed by the caracters choice i would have prefer more dragon quest heroes to play with but it's ok i like this game very much,graphics are good,game run fast and smooth (much better than the ps2 version) and you still can play with your friends at home,great fun,my favorite party game!