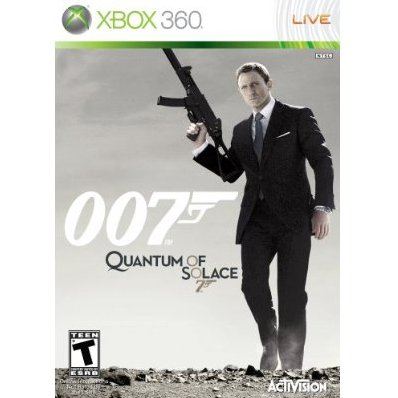 sold Out of print / Out of stock.
Manufacturer
Activision
Rated By Our Customers
Compatible With Xbox360™ (X360)
Version


Click on a thumbnail to see more pictures for James Bond: Quantum of Solace

BOND IS BACK!Coldly efficient...dangerous...the new Bond is the ultimate weapon in today's ruthless world of international espionage. Blending first person shooting and third person action, Quantum of Solace the Game puts you in control of Bond's greatest weapon - his mind. You must think like Bond and intelligently use the map and situation to your advantage. Confront enemies in a variety of ways: take them head on, fire from behind cover or sneak up silently and eliminate them with a variety of special takedown moves. Based on Quantum of Solace and Casino Royale, Quantum of Solace the Game puts you in the dangerous world of international espionage and intrigue.

If you are familiar with James Bond: Quantum of Solace, why not let others know?

this game was fun is worth a low price if you can grab it for cheap.

(to be honest I enjoyed James Bond Blood Stone much much more. This, however, is a movie tie-in and a FPS game and Blood Stone is an original story and 3rd person action)
carlosonthenet (1) on 10, May. 2011 10:39 (HKT)
Medicore Game, Not Bad If On Sale
Cards on the table first, I am a Bond fan, but a hardcore gamer, too.

On release, this game got mediocre reviews, and the game can only get worse with time as standards get better. It's surprising that Treyarch went from this to the much-lauded Call of Duty: Black Ops (which I haven't played, but looks miles better than Quantum).
The graphics weren't even that good for the time, but they do the job. I actually found the weapons quite satisfying, and the stealth system to be pretty fun. Another plus point is they bothered to get the main actors from both Daniel Craig Bond movies to voice the game. So the single player campaign is pretty fun, but pales in comparison to other games in the genre.

There are still people playing multiplayer, but this long after release (about 2 or 3 years), it'll be an uphill struggle for newcomers, as it's likely all the other players know all the maps by heart. That's certainly how I felt when I gave it a try. It's not like the multiplayer component ever lit the gaming world on fire, anyway.

This is a hard game to recommend over other superior releases. Even the over-rated Modern Warfare (which you can also get in bargain bins now and came out around the same time) is better than this. But it's a fun little game if you really want to take the plunge.
paulxxxx (3) on 23, Oct. 2010 12:28 (HKT)
Not bad
The graphics is abit outdated, but the story...action... and atmosphere is handle well. Consider the recent price... a good deal
Ajax (70) on 24, Sep. 2010 11:20 (HKT)
Good game
Not a goldeneye... but worth playing.
robertbright (24) on 23, Oct. 2009 15:33 (HKT)
Short, simple, sweet.
A simple campaign will have you done in less than a day but the multiplayer will keep you hooked. And you can play as Bond. James bond.