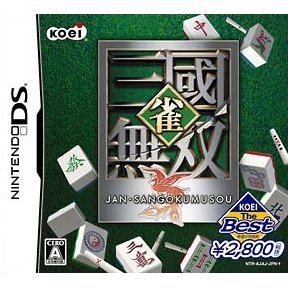 If you are familiar with Jan Sangoku Musou (Koei the Best), why not let others know?

[This review is based on another version of this product]
jasonditz (2) on 21, Feb. 2011 09:00 (HKT)
If you're a Dynasty Warriors fan, this is an extremely easy game to explain - it's like Dynasty Warriors, but you're playing Riichi Mahjong.

You create a character (chose a picture and name yourself) and then you're right into the game. Three story modes for each of the Three Kingdoms are available from the start, and you begin playing some relatively weak opponents and eventually run into some stronger ones. There's considerable storyline and voice acting, all in Japanese of course, and mostly seems to be what you'd expect from the Dynasty Warriors guys.

Say you start with the Wei kingdom, you play the first round against Xiahou Dun, Dian Wei and Xu Zhu. Yes, Xu Zhu is just as dumb as you'd expect from the character's background, and Xiahou Dun is clearly the strongest of the three. Game is straightforward two round Riichi, with the guys every once in awhile interspercing some comment or flashing their sword when they lose.

That's the nuts and bolts of the game, and its a fine job as a Riichi Mahjong title, though as with most such games is pretty much English-free, but the dialogue is mostly spoken and largely just atmosphere.

Additional options include freeing up other storylines, playing Riichi tournaments with everyone, etc.

If you're in the market for a PSP Mahjong game (and not one of those dumb Solitaire Mahjong titles) this is both one of the deepest and cheapest options available. It'd be much more friendly with a little bit of English, but considering this is Japanese-centric Mahjong with Chinese-centric characters, its hard to be too surprised that they didn't give a lot of concern to US localization, and the game is well playable without any Japanese knowledge (better be able to count 1-9 in Chinese though).