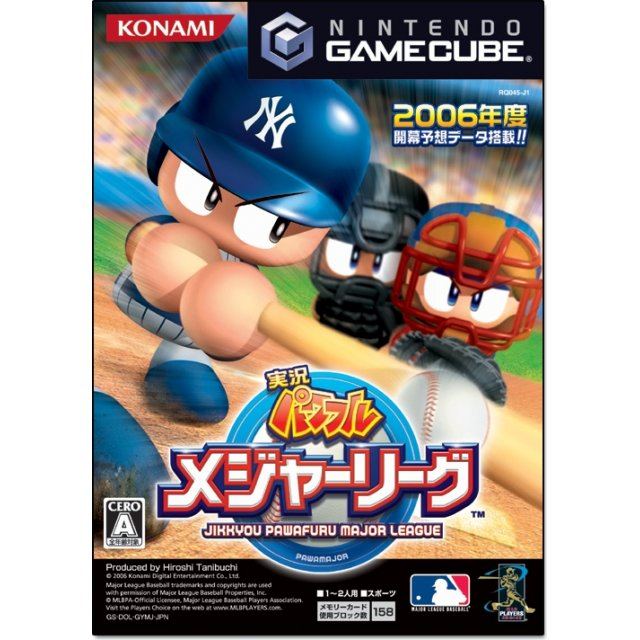 Collections
Konami
Compatible with GameCube™ (GC)
For JPN/Asian systems, use Freeloader for other.

sold Out of print / Out of stock.
Manufacturer
Konami
Compatible With GameCube™ (GC)
Version

Jikkyou Powerful Major League is an installment of Konami's popular Pro Yakyuu (Powerful Pro Baseball) series. This time however the game is based on the MLB rather than the Japanese national league.

If you are familiar with Jikkyou Powerful Pro Major League, why not let others know?

Thanks.
[This review is based on another version of this product]
HE-DECK-KEY MATT-SUE-E on 03, Jun. 2006 13:16 (HKT)
It plays excellently if you are a fan of Juiced
First of all the batting lineups are out of order which makes it better because Japanese know baseball better than Major League coaches. For instance Oh Kantoku puts Ichiro in the number 3 spot in the batting lineup while Hargrove puts him at Number one.
- Well, just look at the results.

Stadium sounds are great and the bat cracking sounds are right on the money. Also the sound is funny because the game\'s announcers speak Japanese. Its like when Jon Miller and Kenny Smith spoke Japanese in the World Baseball Classic on TNT:

Its Oh Kantoku! NOT O KONTOKU! Jon Miller is a real KON-HEAD! Maybe Dan Ack-*ROID* should join him in the Major League Baseball announcing department.

Controls are easy, just aim and hit the ball with the bat by pushing the O button. Although Big time slugger Barry Bonilla is not in the game, Giant Gonzales from WCW take his place.

Graphics is better than MLB 2k6, simply because that game\'s characters are as uncoordinated as Giant Silva fighting E-KOO-HEE-SAH MEE-KNOW-WA-WA-WA-WA- WAAAAAAAAAAAAAH-WTF! That lady should drink a cup full of SHUT DA FAH-FAH-FAH-FAH-FAH-CUP!

Kris BEN-WA WA WA WA WAAH-WTF\'s batting stance is not in the game. But then who expected it to be? Shane MarkMahon? This is based off the Major League Baseball license, not World Championship Wrestling. But then again, in this day in age they are one in the same. Fake muscles and fake records. Barry Bonilla\'s 700 Homeruns are faker than the Natird Boy Buddy Landell\'s 16 championships
-WHOOOOO, ITS TIME TO RETIRE ALREADY!

In summary here are my scores:

Graphics- 10 out of 10 because the players are deoicted as cartoons like in JUICED: RAMPANT ROIDS, SMASH HITS AND HOW BASEBALL GOT BIG

Sound - 10 out of 10 because OH KONTOKU says so.
Please hire Jon Miller to do the Ketteiban version.