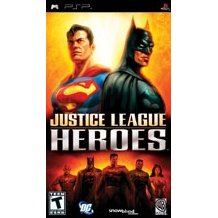 The story in Justice League Heroes begins when a mysterious meteor screams through the atmosphere and crashes on Earth. The meteor begins to emit a message, which is picked up by longtime DC villain Brainiac. The message promises to unlock all of the secrets of the universe, and ultimate power along with it. All Brainiac has to do is obtain the "key" to unlock this knowledge, which just so happens to be currently stored in the Watchtower, the lunar base of operations for the Justice League. Now it falls to the heroes of the Justice League to keep this power out of Brainiac's hands while defending the planet from his gallery of rogues.The ever changing roster of the League is well represented in Justice League Heroes. From the start, players can take on the roles of Superman, Batman, Wonder Woman, The Flash, Green Lantern, Martian Manhunter, and Zatanna. Each character starts off able to use the iconic powers fans immediately associate with him or her. Justice League Heroes focuses on letting fans customize how those powers are used, and lets fans play around with some of the cooler, more obscure powers too.

Michael Jackson The Experience
US$ 13.39

If you are familiar with Justice League Heroes, why not let others know?