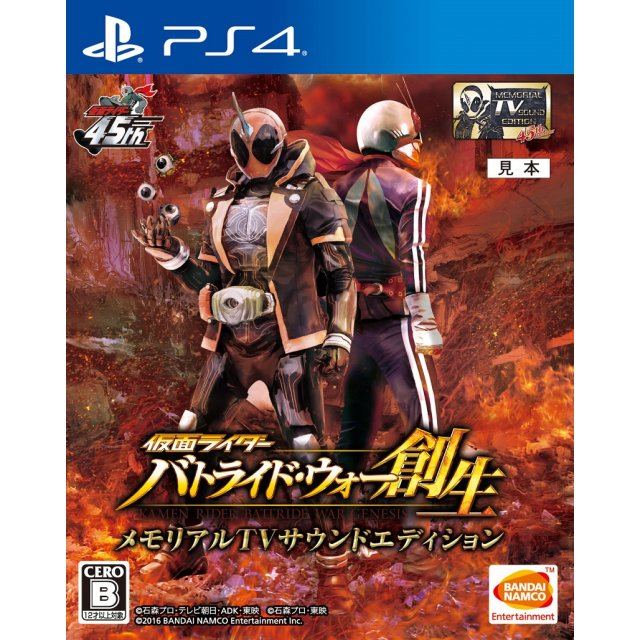 If you are familiar with Kamen Rider Battride War Sousei [Memorial TV Sound Edition], why not let others know?

sheva5577 (1) on 31, Jul. 2017 22:52 (HKT)
5 stars
5 stars
leandrorizzato (216) on 11, Jun. 2017 01:58 (HKT)
Great Game!
Great Musou game of Kamen Rider series. Great gameplay with lots of transformations, cool combos, lots of Kamen Riders characters to choose. Great TV songs on game. Super fun to all Kamen Rider series fans. I really recommend it.
[This review is based on another version of this product]
bdrlshm75 (1) on 15, Jun. 2016 10:27 (HKT)
Great game to play with
This is one of my favorite game that I played so far, I've been playing Kamen Rider Battride war before, even thought the plot of the games looked more or less quite similar but with additional new kamen riders especially kamen rider ghost still able to make the games quite interesting and exciting to play with.....
Arthur (1) on 08, May. 2016 08:33 (HKT)
Amazing game that's worth the wait, but....
I did have tons of fun with the game but I feel as for my first Kamen Rider game it's great, but the TV and Sounds edition lacks some parts for this, some tracks are gone and it's only till you use an ultimate form does the song play. I would had enjoyed it even more if it had more music from the series's than just the generic music then the epic themes. But I love this and I would get the next release just so I can play as Kamen Rider Ghost complete with full working forms, and Necrom with his forms. I thank you for your time and have a nice time!
[This review is based on another version of this product]
irwingods (1) on 01, May. 2016 08:44 (HKT)
A game perfect for fans
Technical Opinion: The game is good, especially for Kamen Rider fans. Memorable quotes, attacks, scenes, battles, everything that will make a fan smile, even with the small things. The game fails in one point, still not having a lot of characters, enemies and forms, but they put a lot of characters, playable characters even, so not putting enemies and some forms to bring a whole new group of perfecly playable characters is a worth sacrifice. And one more good point: Hard is really Hard. Not because the minor enemies will be strong, but because some bosses are really hard to beat and it's harder to get a higher grades (from E to S).

Personal Opinion:
How do you deal with a bunch of monsters?
Step 1: Get G3-X and Autovajin
Step 2: Use a lot of bullets
Step 3: Profit

Really, i never had so much fun with a game in a long time, plus i was really hyped with G3-X, which helped.
1 »