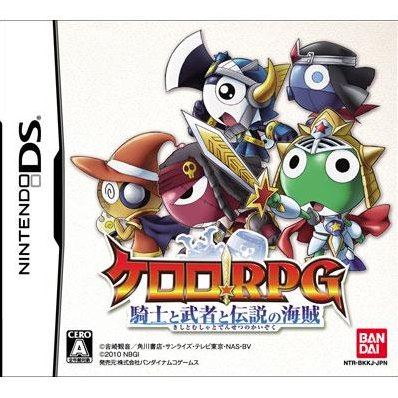 Keroro RPG: Kishi to Musha to Densetsu no Kaizoku


Click on a thumbnail to see more pictures for Keroro RPG: Kishi to Musha to Densetsu no Kaizoku

Keroro and his team work hard everyday to maintain peace in Trinitia, a dimension that consists of three worlds - the knight, the pirate and the warrior. Win iconic costumes from anime, manga and plastic models on your journey, cosplaying is one the Keroros favourite past time after all.Everyone who played the Tales of Series will master this game in no time. Keroros fight in linear motion battle systems, enter matches in the arenas and win gummis in the quests.There are plenty of skits, jokes and voiced events in the game, come adventure in the wacky world of the Keroros.

If you are familiar with Keroro RPG: Kishi to Musha to Densetsu no Kaizoku, why not let others know?

Of course, I'm a college student, so I haven't had time to finish the game yet, but I'm very pleased so far.
I loved the cameos of other game/anime/etc. characters and the battle system is great.
For me, as a Japanese game, it's worth the price.
Others with no knowledge of Japanese might have issues with it, though... and I highly doubt an English release.
wes94 (11) on 14, Apr. 2010 04:09 (HKT)
Fun but short
The gameplay is fun like the tales series but not as long. Mine was probably short because I forgot to switch the difficulty from easy to normal. There is a bonus dungon but it's hard,even on easy.
kazmhyren (1) on 02, Apr. 2010 06:22 (HKT)
Keroro + Tales = Fun Game
This game caught me by surprise on just how much fun it is. Using the cast of Sgt. Frog/Keroro Gunso and putting them in an RPG world where they fight using the Tales battle system really made this game very fun.

The main story isn't very long if you play on easy and normal mode, so running in there on hard mode really ups the gameplay and if you're familiar with the Tales battle system, you will catch on fast. The game is practically a true blue Tales game.
The boss battles in this game are great and the music, at different points, really adds feeling to the combat.

There's a card mini game where you can battle random people to gain cards. It's a fun mini game, but not huge to complete.

There is things you can do after you beat the main story, so the adventure isn't over that fast. The bonus dungeon will have you questioning how strong your team was after beating the final boss because that place ups the challenge a nice bit.

Naturally, the game isn't perfect. The computer AI can be a major pain at times when they don't block, even after setting them to block.
Random battles are a bit common, so be ready to get a bit frustrated when you're trying to get out of a place and you run into battle after battle.

All in all, if you like the Tales series and want another Tales handheld consider this game. If you loves Tales and the Keroro series, then it's the game for you.