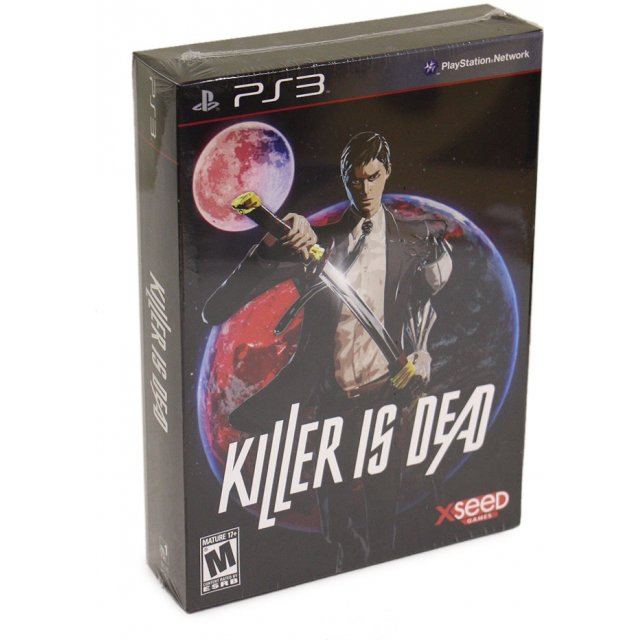 Works on all systems sold worldwide, a correct regional account may be required for online features.
24h In stock, usually ships within 24hrs.
US$44.99
Our previous price:US$ 59.99
You save: US$ 15.00( 25% )
Manufacturer
Xseed Games
Rated By Our Customers
Compatible With PlayStation 3™ (PS3™)
Version

Works on all systems sold worldwide, a correct regional account may be required for online features.
24h In stock, usually ships within 24hrs
Price
US$44.99
Our previous price:
US$ 59.99
You save:
US$ 15.00( 25% )
Play-Asia.com Return & Refund Policy
Click on a thumbnail to see more pictures for Killer is Dead (Limited Edition)

Killer is Dead takes place in a future world with an abundance of technological advancements - including lunar tourism and cybernetic enhancements. Play as main character Mondo Zappa, a professional executioner - tasked with killing dangerous criminals and assassins around the world. Mondo has a few tricks up his sleeve, including the cybernetic left arm that can be transformed into multiple different weapons. General human strength and ability are enhanced through biomechanical replacement parts and doping at a regular basis. Such advances are arising at a dreadfully fast rate that a new type of criminals has started emerging. They’re stronger, faster and unethical than ever before! Because of them, petty crimes and terrorism are everywhere. The police and military are having a hard time to keep up with them. The world is becoming more and more hellish each day.

If you are familiar with Killer is Dead (Limited Edition), why not let others know?

darien.morales.med (9) on 12, Aug. 2018 16:56 (HKT)
An acquired taste
I first got this game back in the future, finished and sold it. Now years later, remembered with love and had to buy it again. There's a lot of screen tearing, but the gameplay is good; the setting is what makes this game.
raf (11) on 04, Jul. 2018 17:22 (HKT)
No title
Another crazy game from SUDA, fans know what to expect others should at least try it.
Great edition.
[This review is based on another version of this product]
Caesar (31) on 28, Nov. 2017 13:46 (HKT)
Good, but not enough
I got this cheap, so it was an ok deal, the game itself is really suda51, has some gameplay issues, and well, to be honest, i felt dizzy while playing some areas (don't know if its because of the bright colors), it has a lot of room to improove, but at this price it's ok
valagardo1 (2) on 04, Jan. 2017 07:19 (HKT)
Excelente Precio y Excelente Pack
Este juego encabezado por Suda 51 está excelente.
Es para un público muy limitado y selecto, que le gustan los buenos juegos Japoneses, las películas de Takashi Mike y las Mujeres Sexys
NoName (1) on 08, Feb. 2016 03:04 (HKT)
Pseudo-Suda
While Suda51 himself was not responsible for directing this game, he did write it. It certainly shows. Sometimes the game feels like Suda accidentally died during Grasshopper Entertainment's Christmas party and they had to make something that screamed "Suda Did This" as publicly as possible to cover it up. But there are definitely a few moments where Hideyuki Shin pulls off something so stylish with Suda's writing that even Suda himself would be hard-pressed to top it. It definitely won't feel too fresh or new to anyone familiar with Suda's other work, and it still has the same Grasshopper problem of really simplistic gameplay, but Killer is Dead manages to be enjoyable for its sense of style and sheer spectacle alone.

Far from unenjoyable, but a bit too off-color in a by-the-numbers way, if that's possible.
1 »