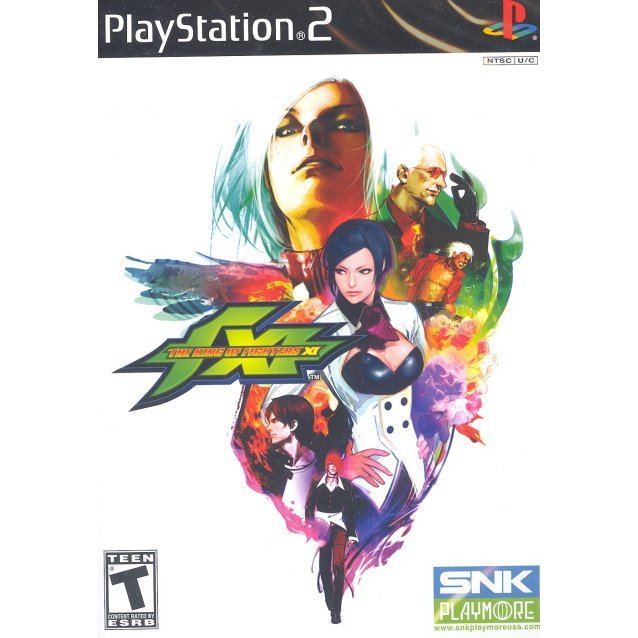 SNK Playmore
Rated
By Our Customers
Compatible with PlayStation 2™ (PS2™)
For US/Canada systems.

Earn 47 Coins for the Loyalty Program (beta-test)!
Trustpilot
Trustpilot
Click on a thumbnail to see more pictures for King of Fighters XI

The world has been rocked by two major events - Mukai has stolen the Orochi seal and the theft of the Yata Mirror by Ash Crimson. Just as the dust had settled, a new King of Fighters tournament was announced - a tournament which brings together some familiar faces, as well as new comers to the world of King of Fighters. Not all is what it seems in this new tournament. There are too many unanswered questions. Too many mixed objectives. Who are the group 'Past Coming People' and what do they really plan to do? Where would Orochi's force finally land once the seal is finally open? Will Chizuru and friends still be able to seal Orochi? And just what is Ash Crimsons' true plan? Total of 11 teams; 47 Characters, including 3 all new characters to the franchise. Exclusive PS2 characters: Mai Shiranui, Mr Big, Geese Howard, Tung Fu Rue, Robert Garcia, Hotaru Futaba, and EX Kyo Kusanagi. 7 Playable Boss Characters â€â Adelheid Bernstein, Gai Tendo, Sho Hayate, Jazu, Silver, Shion and Magaki

If you are familiar with King of Fighters XI, why not let others know?

Aquarius_D (31) on 17, Jan. 2014 00:52 (HKT)
The Best KOF for PS2
Easily my most favorite KOF on PS2, a must have for fans of the series and a good buy for fighting game fans
Rich_F (77) on 28, Oct. 2013 01:47 (HKT)
Good Game
I still like the classics, but this is a good game.
messiasps3 (8) on 22, Oct. 2012 03:46 (HKT)
the king of fighters xi
Well folks what I have to say is that the king of fighters XI is a great fighting game series, as the game seems to be a bit more defined in the graphics of the previous games, and the fun is intense with several new characters and fantastic special , fighting game very good and recommended for anyone who likes to brawl ...
Odie (466) on 31, Jul. 2012 14:36 (HKT)
Good KOF Game
King of Fighters XI for PS2 is a good KOF series. The graphics are good for a aged PS2 system. The controls are tight & executing special moves are not a problem here.
rgr2508 (13) on 07, Jul. 2008 04:58 (HKT)
US version -- Great!
The american version of KOF XI worth the buy. It's pretty similar to the japanese version, and the blood still in game (in other words, NO censorship here). Online play is gone, but since originaly it works only for Japan, it's not a big deal. Only minor changes exists, like the buttons used to confirm/cancel selections and the score system. Five stars, like the original version!