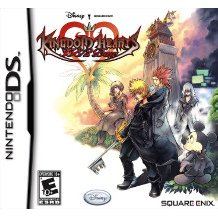 Manufacturer
Square Enix
Rated By Our Customers
24h In stock, usually ships within 24hrs
(Only 1 left in stock.)
Price
US$35.99
Our previous price:
US$ 44.99
You save:
US$ 9.00( 20% )
Play-Asia.com Return & Refund Policy
Trustpilot
Trustpilot
Click on a thumbnail to see more pictures for Kingdom Hearts 358/2 Days

In KINGDOM HEARTS, Sora turned the Keyblade on himself in order to release Kairi’s heart, but his heart was also released in the process. This brought about the creation of Roxas, Sora’s Nobody. Unlike most Nobodies, however, Roxas has no memories of his past. He joins Organization XIII and slowly begins to discover the truth behind his existence and the Organization itself. He meets and befriends the fourteenth member of the Organization, who also has no recollection of her past. What will Roxas see during his time in the Organization? What is the connection between him, Sora and the fourteenth member? And what becomes of them? Dive into the heart of the KINGDOM HEARTS storyline’s biggest secrets.

Please Note: This is the NTSC version of the game which is compatible with PAL systems. Any future DLC may require a US Nintendo Network account.

If you are familiar with Kingdom Hearts 358/2 Days, why not let others know?

Delivery was faster than I expected (I went for the regular airmail and it arrived in Korea in 2 weeks sharp!), and the service was as great as always. Will definitely buy from Play Asia again and again, as long as it keeps up the great work ^-^
1 »