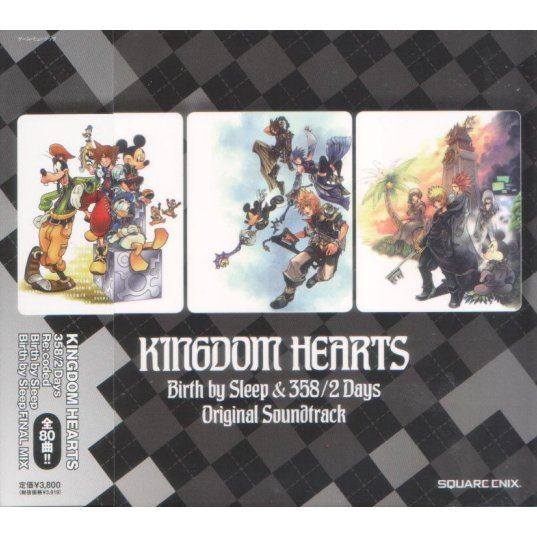 Square Enix
Rated
By Our Customers

Audio CD
5-15d Expected stock arrival within 5-15 days.
US$49.99
Please take note that, once purchased, this item must be paid immediately and cannot be cancelled or returned.
Manufacturer
Square Enix
Rated By Our Customers
Version

Square Enix brings the whole portable kingdom to your home. Kingdom Hearts Birth by Sleep & 358/2 days contains all the music from the two game plus selected tracks from Re: Coded. Besides these three original games, arranged tracks and original pieces from Birth By Sleep Final Mix too made their way into this voluminous 3 CD collection.Shimomura Yoko's music are atmospheric, and brings out the fantasy in Kingdom Hearts, other composers such as Sekito Tsuyoshi and Ishimoto Takeharu, too contributed pieces to the collection, come experience the magic through the album.

If you are familiar with Kingdom Hearts Birth By Sleep & 358/2 Days Original Soundtrack, why not let others know?

amethyst-angel (8) on 28, Aug. 2012 10:29 (HKT)
Gorgeous soundtrack
All of the Kingdom Hearts soundtracks are treasures deserving to be bought, and none more so than the Birth By Sleep soundtrack. So many of the songs are beautiful or epic or fun or nostalgic. Disney fans, KH fans, and music lovers alike will be awed by it. You won't regret buying it!
LancelotAki (13) on 25, Apr. 2012 20:48 (HKT)
Brilliant soundtracks!
Being a long-time fan of the Kingdom Hearts series, I couldn't wait to get my hands on this multi-game soundtrack, and it sure as heck did not disappoint.

Featuring the emotioaln tracks from Birth by Sleep, the fun pseudo-chiptunes from Re: coded and the other deep music from 358/2 Days, composer Yoko Shimomura has really shown off her greatest work with this OST.

A must-have for all fans of the Kingdom Hearts series, and even if you don't really like the games, get it for the music!
alton603 (6) on 08, Apr. 2012 11:02 (HKT)
A memorable soundtrack
Shimomura's style of music is so impressive. When I heard the games were changing direction in music, I had no doubts it would be epic ever since hearing Fate of the Unknown back in Kingdom Hearts 2 Final Mix's Secret Ending. 358/2 Day's original tracks like Xion's Theme were beautiful and emotional. This soundtrack is definitely worth it.
Shangyou (161) on 12, Jul. 2011 23:35 (HKT)
Awesome
Love the music!
BH (14) on 08, Jul. 2011 05:57 (HKT)
Typical Kingdom Hearts OST
Long time expected and not been disappointed.
Most notably the "Birth by Sleep" part shows Yoko Shimomura excellence in composing music. Strong, emotially varying batle themes, harmonic field tracks and intense character themes. Unfortunately the synthesizer sounds are not as good as in the soundtracks of the KH main titles (even some of the "Birth by Sleep" songs).
1 »