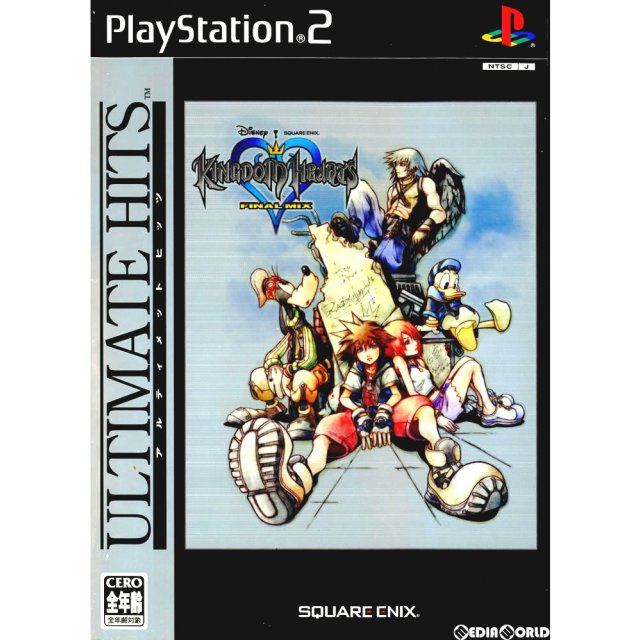 Collections
Square Enix
Rated
By Our Customers
Compatible with PlayStation 2™ (PS2™)
For JPN/Asian systems only.

NTSC
24h In stock, usually ships within 24hrs. (Only 2 left in stock.)
US$47.99
Limited time offer - Secure yours now before the offer expires!

Square will give Japanese fans a chance to experience the English version of Kingdom Hearts with the release of Kingdom Hearts: Final Mix. This updated version of the game includes English voice acting, the English version of the game's theme song, "Simple & Clean", as well as appearances from a number of additional characters, including Sephiroth of Final Fantasy VII fame. Japanese subtitles will be utilized throughout. Kingdom Hearts is every crossover fanfic's dream, with characters from many Square titles and Disney movies.

If you are familiar with Kingdom Hearts Final Mix (Ultimate Hits), why not let others know?

1Ebony1Ivory (1) on 12, Jul. 2011 21:48 (HKT)
Definitly worth it!
This is the complete story of the start of Sora's journey that includes alot more extras like: new Bosses, keyblades, enemys and their colors, the whole scene of "deep dive", more secret cutscenes, secret boss "unknown" etc.

It also comes with subbed text in japanese, but the voices are still in English like Kingdom hearts II Final mix.

If your a big fan of kingdom hearts, need more challenge, want to know more about the story or simply need to test it I recommend this game to you. YOU WON'T BE DISAPOINTED.

-1Ebony1Ivory
kc_karthik (3) on 11, Jul. 2011 13:22 (HKT)
Amazing game with extra goodies
KH is a game that touches your heart. KH Final Mix gives you the same amazing game with added extras. The spoken language is still English but the menu and commands are all in Japanese. This is well worth the additional content (Booses, enemies, cutscenes etc.).
t.loy (3) on 14, May. 2011 09:57 (HKT)
Great, fun Final Mix.
As a Final Mix, this game is fantastic. Sure, it's got a lot of the same things as the original, but that goes without saying, really. The extra bosses etc. are hard, but that's what you expect, and they're not IMPOSSIBLE. And the extra scenes are great (though the cognitive dissonance in the normal scenes if you read the subs and hear the dub at the same time is kind of brain-breaking), as is the additional synth items and heartless - as much of a PITA as they can be - really give it a new spin.
If you didn't like the original it's definitely not for you, but if you did it's a really great version - if you haven't played it before definitely get this by preference.
jh61188 (22) on 10, Feb. 2011 07:48 (HKT)
A great addition to the series
A great pick up for kh fans with alotore content
Muggshotter (19) on 29, Dec. 2010 09:49 (HKT)
A likely purchase for people unsatisfied with a regula version.
Having Kingdom Hearts II: Final Mix+, the lack of a previous Final Mix started to bother me, so I clicked on this site again and got the game for I was not satisfied with the regular version. Yes, this came at a cost that I haven't acknowledged all Katakana or even Hiragana yet. But so far, so good.

While it may look like your regular Kingdom Hearts 1, this rose hides extra combat abilities, a possibility to skip those annoying scenes, six new weapons, a new, harder difficulty level, a couple new heartlesses and a new boss battle. All that and what you got back in 2003. This is THE Kingdom Hearts 1, the true vision of Sora's very first journey.

This game doesn't outclass your regular Kingdom Hearts 1 by miles, but the superiority is there. There's more content and that is what makes this game better.
I like all that little stuff that tweaks the game in the better direction.

As a Kingdom Hearts fan I want to get the most out of the series and if that is what you are striving for too, then Kingdom Hearts Final Mix is without a doubt on your wanted-list.
1 »