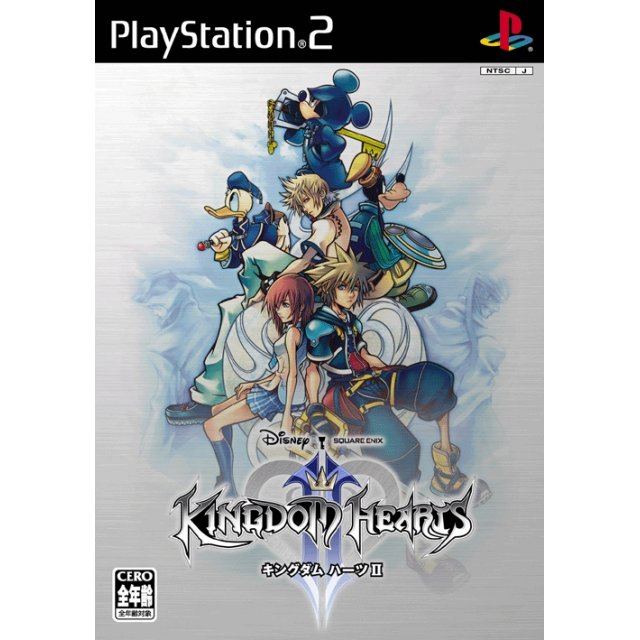 In the previous work, for world peace, Sora had to leave behind the king of Disney, Mickey Mouse, and his friend Riku and closed the gate. But just before the gate closed, the king said he would find the door of light to escape, and so Sora, with Donald Duck and Goofy embarked on the journey to find the king and Riku. On the way, Sora met up with a mysterious dark figure who led them to a secretive castle and the king and Riku had actually been there previously. Sora found an important key for their journey but he started to lose his memory...One year later, in Twilight Town, where there is neither day nor night, the story picked up again from a youth. Secret organization, XIII, incoming crises, what is waiting in the end for Sora?Kingdom Hearts II is the sequel to Square-Enix mega-hit "Kingdom Hearts". The biggest feature of the game lies in having both Disney cartoon and movie characters and Final Fantasy's more well-known characters making their appearances, letting different characters to meet in this fantastic world.Disney worlds and characters that made their appearances in the last work will still star here, like "Beauty & the Beast", "Aladdin" and "Little Mermaid". Additionally, some other productions have also been included, such as "Mulan", "Steamboat Willie", "Pirates of the Caribbean" and more.This time, even the battle elements have been buffered by new members. Besides newly added magic and the combination move of Donald Duck and Goofy, the most significant one is the "Drive" system tying abilities to different outfits. For example, if the "Wisdom Form" is donned, the normal "battle" command will change to firing magic projectiles and many similar innovations, making the battles more lively and exciting.闇の世界に残った王様と親友リクを探し、旅を続ける主人公のソラとドナルド、グーフィー。様々な世界での新たな出会いや再会をはたすが、次々と現れる敵は容赦なくソラ達を襲い、またしても険しい旅路となった。ハートレス、ノーバディ、そしてXIII機関。それぞれの思惑が行き交うこの物語の結末とは、そしてソラたちは旅の終わりに何を見るのか──。