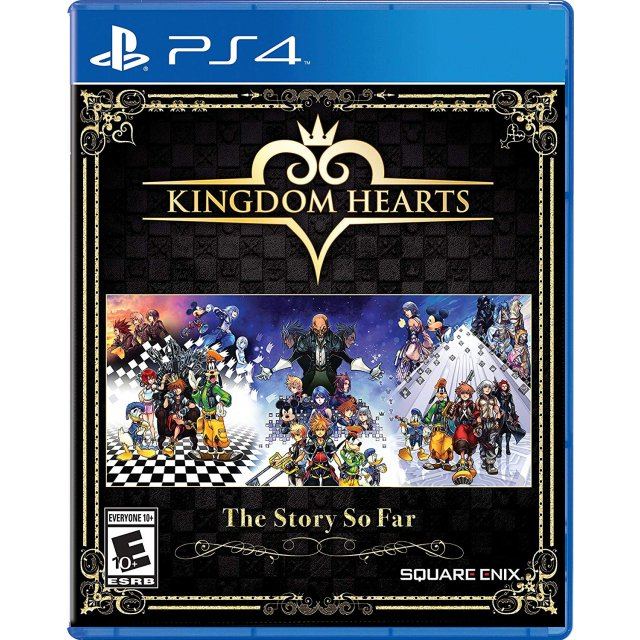 Kingdom Hearts: The Story So Far

Works on all systems sold worldwide, a correct regional account may be required for online features.
24h In stock, usually ships within 24hrs.
US$45.99
Manufacturer
Square Enix
Compatible With PlayStation 4™ (PS4™)
Version

Works on all systems sold worldwide, a correct regional account may be required for online features.
24h In stock, usually ships within 24hrs
Price
US$45.99
Play-Asia.com Return & Refund Policy
Trustpilot
Trustpilot
Click on a thumbnail to see more pictures for Kingdom Hearts: The Story So Far

In KINGDOM HEARTS - THE STORY SO FAR-, Keyblade wielders can relive the magical adventures of Sora, Donald Duck, Goofy and friends as they attempt to stop the Heartless invasion that threatens their universe. Fans will travel to iconic Disney locales and join forces with beloved Disney and FINAL FANTASY characters in order to fight back against the threat of darkness and bring back light to all worlds.

The compilation includes the following games:

If you are familiar with Kingdom Hearts: The Story So Far, why not let others know?

abbathcl (135) on 20, Aug. 2019 11:29 (HKT)
Kingdom Hearts: The Story So Far PS4 US
Great to get all KH released before KH 3 in one beautiful yet simple edition and for very cheap on sale.
caldx (2) on 27, Dec. 2018 07:42 (HKT)
Finally
I've been playing Kingdom Hearts since it first came out and all the titles since, its nice to have them all in one spot. Great for those wanting to get into the series too.
renaudml (4) on 19, Dec. 2018 04:51 (HKT)
The most logic way to enjoy KH before KH3
So this is the go-to way to enjoy all of KH before the release of KH3...only problem was that it was only available to the Square-Enix store (which means atrocious shipping). Thank god for Play-Asia! Even though the shipment took more than a month to arrive, it cost me a fraction of what I would've paid! Enjoy all the KH games!
lfc78910 (2) on 11, Dec. 2018 00:29 (HKT)
Genial
Toda la saga en una edición bonita y especial, que sale mucho más barato que tenerlas por separado