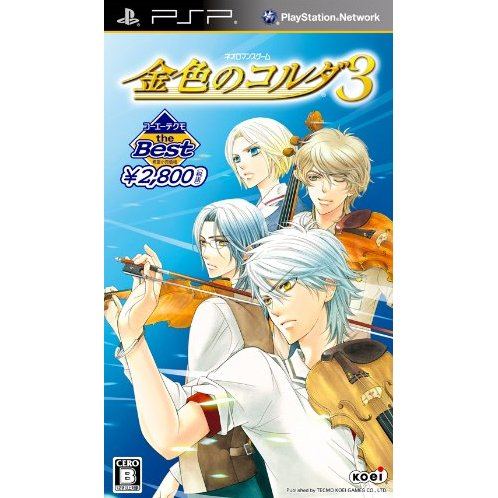 Works on all systems sold worldwide, a correct regional account may be required for online features.
1w Expected stock arrival within 1 week.
US$29.99
Our previous price:US$ 43.90
You save: US$ 13.91( 32% )
Manufacturer
Koei Tecmo Games
Rated By Our Customers
Compatible With Sony PSP™ (PSP™)
Version

Works on all systems sold worldwide, a correct regional account may be required for online features.
1w Expected stock arrival within 1 week
Price
US$29.99
Our previous price:
US$ 43.90
You save:
US$ 13.91( 32% )
Play-Asia.com Return & Refund Policy
Click on a thumbnail to see more pictures for Kiniro no Corda 3 (Koei the Best)

Kahoko and her friends have graduated from Seiso Gakuen, Kiniro no Corda 3 starts with a new violinist, Kanade. She enrolled into the prestigious school and joined the orchestra club, hoping to meet other musicians and improve her skills through friendly rivalry.Rivalry is plenty, however, some of them are not very friendly, while others are full of temptation. Learn about the charming members in the club, what they won't say with words, they may say through music, communicate with them through your violin.Compare to the last three games in the series, this installment contain a lot more love interests. Participate in the national concours and get to know the boys from all the different schools and develop relationships with them.

If you are familiar with Kiniro no Corda 3 (Koei the Best), why not let others know?

[This review is based on another version of this product]
Starlet (14) on 03, May. 2010 00:18 (HKT)
Quite nice game!
I enjoying playing this games, its have nice gameplay, and music, too bad its not fully voiced. But still this game can't be missed to played.

Also, the treasure box package have a lot of nice bonus, so i like it.
[This review is based on another version of this product]
crimsonkuma (18) on 01, Apr. 2010 09:55 (HKT)
Great game, with rooms to improve
If you are fans of Kiniro no Corda series, you may notice this 3rd installment has a significantly different vibe. The game setting is summer, and the characters are portrayed in more of a 'sports youth tournament' way, like Slam Dunk, or some sports manga. Some of the routes would have been better with more development and CGs, but overall this is a great game.
[This review is based on another version of this product]
unicornee (1) on 19, Mar. 2010 20:27 (HKT)
Lack of character development
Overall, it's quite an improvement from the first 2 Corda games. The mini-games were entertaining, and practice time was prolonged. Animation was also refreshing and nice!

However, there are too little CGs and events for each of the character. Granted, there are now 12 guys to go for, but that does not mean quality of their route should drop.

On a side note, I'm quite pleased with the effecient delivery.
[This review is based on another version of this product]
aru (14) on 19, Mar. 2010 09:47 (HKT)
A hit or miss
The background music is excellent, which is great to listen to. The items that came in with the T-box are also worthwhile. If you are a fan of Kure Yuki's artworks, the artbook is filled with wonderful sketches of the characters.

While the game has made numerous improvements in terms of the system, the plot is still the "same o' same o'". It is very unfortunate that the game has 12 candidates for the gamers to choose from, but most of them have short and unsatisfying plots written for them. Even for some characters with "longer" plots, they seem familiar to a certain tennis manga.
[This review is based on another version of this product]
tsuki_no_kurokage (1) on 19, Mar. 2010 09:37 (HKT)
Awesome game overall, but still needs improvement
The Tbox package is definitely worth buying. The illustration book, the illustrated cards, the cds, the planner...they are all perfect. The game itself is packed with humour and drama new to the Corda series. It is definitely a huge improvement from the past Corda games; what I especially loved are the characters.

However, I can't give this full 5 stars because I am still very annoyed by how Koei never makes a Corda game fully voiced. It also does not make sense to experience an unvoiced event with a guy you're chasing. The game doesn't record the unvoiced events too, which sucks. Also, the whole storyline reminds me of PoT. The whole game lacks passion for music since all of the characters are like, "OMG I MUST WIN", unlike the previous Corda games. This ticks me off because the reason why I loved Corda in the first place is due to the way Corda characters' deep-rooted passion for music rubs off on me.

Yeah, just my two cents. Not bashing the game or anything - I love it more than Corda 2f, frankly! - but it would be a whole lot better if Koei could create a fully voiced sequel to this, like maybe a Corda 3 Encore, since the timeline is short. I was expecting Corda 3 to last longer but in actual fact, the whole story lasts for a month. Sad.
1 »