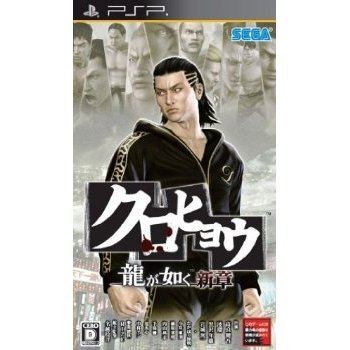 Works on all systems sold worldwide, a correct regional account may be required for online features.
24h In stock, usually ships within 24hrs. (Only 1 left in stock.)
US$56.99
Limited time offer - Secure yours now before the offer expires!

Works on all systems sold worldwide, a correct regional account may be required for online features.
24h In stock, usually ships within 24hrs
(Only 1 left in stock.)
Price
US$56.99
Play-Asia.com Return & Refund Policy

Kurohyou is Ryu ga Gotoku's debut on Sony PSP. The black leopard, Ukyou Tatsuya is a young man who believes fighting is his everything and terrorizes Kamuro chou with his fists. One day, he punches a yakuza boss to death and is captured by the group.The only way to escape being killed right then and there is to become a pawn of the group and participate in the underground boxing match - Dragon Heat. Winning is the only way to survive.At the end of the matches, what will he find? Freedom at last, or the real face of hell?Kamuro Chou is the center of ambition and desire. There are more than 100 branches of sub-story. Be careful when you get into these story branches. Also, remember to meet the cabaret club girls and take them to dates.

If you are familiar with Kurohyou: Ryu ga Gotoku Shinshou, why not let others know?

alexander_minter2000 (1) on 12, Dec. 2010 00:37 (HKT)
One of the best Ryu ga Gotoku game of the series
I been playing the demo version and watching gameplays of the game. Kurohyou:Ryu ga Gotoku Shinshou hapeen to be one of best storyline like the other Ryu ga Gotoku games. It get's alot of fun when u beat up thugs,workers,harajukus,and yakuzas. The music on this game is totaly awesome a combiation of hard rock,hip-hop,and techno makes your ears go "boom". Overall this game happen's to be one of the best same goes for the rest of Ryu ga Gotoku series and hope it will be the best PSP game in Japan. "My grade for this game A+++"
slaymail2k-shop (6) on 12, Oct. 2010 20:55 (HKT)
Ryûga gets portable... and still works
As Ryû ga Gotoku fan of literally the first hour, I was not sure whether the PSP version could live up to its great predecessors. The demo was promising, and so I ordered the game right away.
When I finally got my hands on the retail version, it blew me away! It looks great, plays great, and still has a story as complex and enthralling as the other games of the series. The new hero Tatsuya is not as stylish and cool as Kiryû, but one gets used to him.
Experiencing good old Kamurochô from the perspective of a youngster brings a nice change (one keyword here would be 'part time job').

Intense fighting scenes, lots of side quests (over 100) and the well-established kyaba clubs... everything a Ryûga fan needs!
Finally I am able to enjoy my famous game series on the road, too! I hope for a sequel to the new chapter.
junkmailflodedinbox (1) on 30, Sep. 2010 23:32 (HKT)
yakuza portable
its one of the best portable games i played.
overall a great game and shows off what the psp can do. realy nice fights weather just a group of thugs or in the arena.stat development requires you find the dojo only real anoyance. but the map show were to go almost all of the time for main story missions.