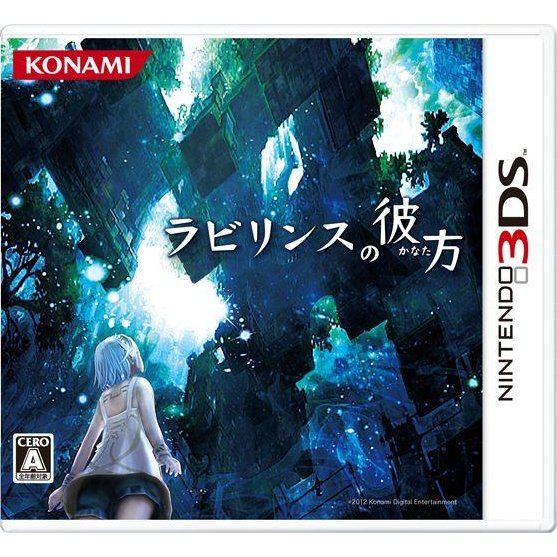 Konami
Rated
By Our Customers
Compatible with Nintendo 3DS™ (3DS)
For JPN/Asian systems only.

NTSC
1-2w Expected stock arrival within 1-2 weeks
Price
US$53.99
Our previous price:
US$ 79.90
You save:
US$ 25.91( 32% )
Play-Asia.com Return & Refund Policy
Trustpilot
Trustpilot
Click on a thumbnail to see more pictures for Labyrinth no Kanata

Heed to the call and stumble into the sealed labyrinth. A mysterious silver haired girl will lead the way. Explore the massive mazes with her, discover treasures and develop her into a warrior and your perfect right hand woman. Although neither the player nor the girl have any idea where they are heading, they know they must open a path for themselves, equip the girl with magic so she can deal massive damages to the monsters. Solve puzzles together, the Labyrinth itself is a mystery, find a way out alive to figure out who created this monstrous structure and why.

If you are familiar with Labyrinth no Kanata, why not let others know?

jobson.quaresma (135) on 07, Apr. 2013 12:29 (HKT)
Excellent
A extremely gorgeous game, great visuals, great sound, great story. Although if do not have fluency in Japanese, you will enjoy less the game. It is a pity that the game was not localized.
paperdoc1 (115) on 28, Jul. 2012 10:45 (HKT)
Labyrinth no Kanata
This game is gorgeous with amazing animation and sound. The story is intriguing, but I wish I knew Japanese in order to get all the details. I am having a blast with this game, but realize I am losing out somewhat due to language barrier.
jast_im3@yahoo.com (13) on 14, Mar. 2012 16:43 (HKT)
Labyrinth no Kanata
I don't claim to know Japanese, yet I had fun with this game. This game amazes me with its graphics and sound tracks. The graphics is complex with soft feel to it. The soundtracks complements this mixture of quality components. Overall, I am satisfied with my purchase.
micah2 (6) on 07, Mar. 2012 01:06 (HKT)
The Power Behind the Girl
Solid and fun game, a classic dungeon-crawler with some original and challenging twists to the battle system.

The comparison with ICO is obvious, however, the comparison is mostly superficial - yeah, there's an NPC girl going along with the character(s) you control, but that's the only similarity.

Being a maze-oriented dungeon-crawler, there's little adventure beyond finding secret passageways (always easy), and "hit this switch to open this door" types of things. The entire game is really about the series of monster battles, then. The battle system is a unique and complex one, which is why it evolves in stages throughout the game, introducing new complexities only gradually.

First, there's a sort of rock-paper-scissors magic system. This results in the player actually controlling the moves of four "players" (presented as being fellow players in a multiplayer game, whose dialog pops up every now and then), each with a different (and changeable) form of magic. If your magic is the "paper" to the enemy's "scissors", you'll still deal damage to the enemy, but only half as much as if you were using "scissors" magic. If your magic is the "rock" to their "scissors", then you'll deal double damage - AND the HP you remove from them then becomes stocked on the screen, and the very next person with the same magic as that monster, can absorb the HP themselves on their next attack. Including the monster itself. So this gives you an avenue to replenish player HP during the battles, provided there is a monster of the right magic (or you use an item to change what magic type a user has). It also means you have to plan each move fairly carefully, so you avoid letting the monster reabsorb all the heavy damage you just dealt him. You can control the strength of your attacks, allowing you to wait twice as long for your next attack in exchange for doing greater damage than two separate attacks would have done in that time (later you can add greater control than just "one or two turns"). As you decide how much power to use, you are shown how this will effect the order of play, so that you can plan the most effective strategy. The monsters are just as capable of absorbing HP that they've stolen from you, so there's equal parts defense and offense here.

After you've mastered this ability, you gain the ability to stock up magic for the girl to use during her attack (prior to which, she was only able to throw rocks, which had little effect). Each player character's attack can either add value to her magic stock, or multiply the value of her magic stock (though quadrupling a stock of zero obviously doesn't help much, which is why you need to add to the stock before multiplying becomes useful). The degree to which you add or multiply is related to the damage your attack does to the monster. This adds a new level of strategy to the gameplay, where you have to weigh the benefits of maximizing your players' attacks, against the benefit of using a less effective series of attacks for your players, but maximizing the benefit you give to the girl (who has a potentially enormous attack, but only if you can stock her magic effectively).

Finally (as far as I know - there might be more later, but this is as far as I've gotten), you gain the ability to shield the girl with your own HP. This power adds several new aspects to the battles, as you can take any combination of your players out of play for a while, in exchange for shielding, and even regenerating the HP of the girl. In addition, taking players out just temporarily allows you much better control over when they make their attacks - for instance, delaying a "rock" magic attack until just after the "scissors" monster makes theirs, so that they don't get an opportunity to reabsorb their hit points - or so that you can use a "multiply" attack after you've done a series of "adds" first (to the girl's attack magic stock). This is also the first opportunity you have to replenish the girl's magic - up to that point, the only way to replenish her HP was to find a health regeneration spot.

I'm enjoying the game very much - but it really comes down to whether you enjoy these battle strategies. After all, the game is essentially just one big sequence of monster battles.

The girl's animation is excellent, and fun to watch (though not as amazing as Yorda from ICO), and the environments and magical special effects are beautiful.

Knowledge of Japanese language is probably not really necessary (but adds to enjoyability), since the majority of the dialog is just banter. Whenever something important to gameplay crops up (mainly, the abilities I've described above), it pops up a page from a built-in manual. The player is sometimes prompted to answer a question, but as far as I know the answers have no real impact on the game.
frumply (48) on 05, Mar. 2012 00:33 (HKT)
interesting
Dungeon romp with a Ico-style girl in tow. Certain parts of the game are unorthodox, as you'd expect from any Tri-Ace game.
1 »