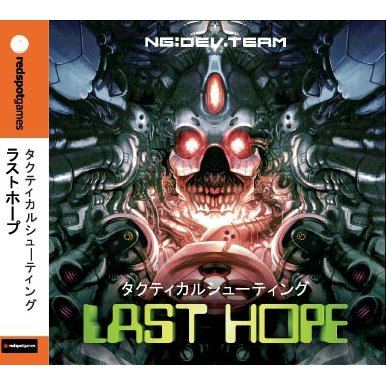 redspotgames
Rated
By Our Customers
Compatible with Dreamcast™ (DC™)
Works on all systems sold worldwide, a correct regional account may be required for online features.
Get informed when this item is in stock by using our Personal Agent from the right.


Click on a thumbnail to see more pictures for Last Hope

The evil empire is rushing at light-speed across the galaxies, heading towards Mother Earth. Barely 24 hours ago, they penetrated the last defense line of our galaxy, the Arsion Laser Belt. Millions of innocent people perished in outer space colonies. 70% of our fleet was destroyed during first contact. Our intelligence has now extrapolated their arrival within six days. Conventional weapons cannot stop them. Our last hope is in your hands: The Z-42 Warpstar. Warp into their territories and destroy their leader before they reach Earth. Last Hope is a shooting game with rotating satellite system and heavy influence by tactical game play. Memorizing level architecture and enemy patterns are necessary for further approaching. The satellite and the beam are the most important components of the game mechanics. You have to learn to deal with both techniques in interaction with the other. It is possible to rotate the protection unit in 360° around the playership and to engage it in 8 gradations. Just press "A" to shoot, "R-Trigger" to rotate clockwise and "L-Trigger" to rotate anticlockwise. The protection unit mainly serves the defense of enemy plasma projectiles and to fire a stronger plasma shot. There are four difficulty settings: very easy, easy, normal and hard. Less experienced players can enjoy the game on very easy and easy, while experienced players will enjoy the game on normal or challenging it on hard. There are a total of 6 stages. These vary from a sandily space laboratory, a channel fulfilled with muddy water, a idyllic landscape with floating continents, a soul melting enemy factory on fire to an eerily and muggy alien stage. Last Hope is comparable to classics like R-Type and Gradius. Yet it has it's own visual impressive graphic style and fresh game play. It also features a superb 16-bit digital audio soundtrack, which suits perfectly the games atmosphere. Exclusive features only available in the Dreamcast™ compatible version: Exclusive Dreamcast™ Game Modes:
This is a CD-ROM based product and might not be compatible with some Dreamcast™ consoles manufactured after October 2000.
This software is not officially licensed, designed, manufactured, distributed or endorsed by Sega.

The Legend Of Zelda Ocarina Of Time Rearrange Soundtrack
~ Emiko Shiratori, Moka
US$ 34.99

If you are familiar with Last Hope, why not let others know?

forbeslongden (11) on 04, Nov. 2008 20:58 (HKT)
So-So homebrew effort...
Having bought this late last year I have switched it on a couple of times, as games have a habit of growing on me over time, though this is one game I just can't get on with for a number of reasons, 1) I can't get passed level one, this isn't because I'm rubbish it's just I don't like games that cause you to crash when you hit the wall whilst trying to avoid a line of enemies, 2) the game is JUST Sol Feace on the Mega CD, this is so obvious but I find that title lots more fun, sorry guys, I will buy Dux and future products because of my attachment to Sega's model.
ROBOTRON (5) on 07, Aug. 2007 03:40 (HKT)
ROBOTRON
Great game, lovers of R-Type and the like, rejoice! Great 1st try...I hope Neo Dev continues to produce shmups. High quality, hard as heck though.
glimburg (1) on 01, Aug. 2007 22:09 (HKT)
Better than expected
I have to shake my head when I see comments like the one by willischow.

\"Poor game\" and no more explanations?! Oh boy, sure you are one of the guys which downloaded it illegaly from the net and only tested it for about 10 minutes because you are way too overflooded by all the other games you download every day.

Stimulus satiation that is.

Actually, when you buy Last Hope you worthship it another way and you HAVE to get used to it... any it\'s actually a LOT of fun. Very motivating due the difficulty, a lot of details (handdrawn graphics!!!) and the soundtrack is awesome!!
grubensau (1) on 27, Jul. 2007 02:21 (HKT)
No title
.......and heavy influence by tactical game play. Memorizing level architecture and enemy patterns are necessary for further approaching.

So so true!!!!! Anyway its for dreamcast and its cheap.
vasteel1ne (4) on 24, Jul. 2007 20:06 (HKT)
Okay shooter for Dreamcast
This review is based on the Limited Edition package hence the mention of soundtrack at the end. I had been following the progress of this title on the Neo-Geo for some time. The announcement of it coming to Dreamcast was cause for joy at least from the screen shots. Fast forward many months to this release and what we get is a so-so shooter with okay graphics. I was really dissapointed with the final package. There are far better shooters out there for the Dreamcast right now with more being released almost monthly. First off it\'s just plain hard the want to throw your controller against the wall hard. Most shmups even R-type and Image Fight two of the most notoriously difficult shmups edge you into the insanity. This title right from the get go is insane. The power ups are very unbalanced and some parts when you die and start over with a pea shooter you might as well hit reset. I don\'t know if it\'s me but I just expected a lot more from this. I must commend the designers at least for making an effort to bring an original hand drawn shooter back into the mix. I just wish it was a lot better than it is. Music is okay. However I just cannot justify an extra 40 bucks for a soundtrack and a paper insert. If you must play this go for the cheaper version as there are better ways to spend 80 bucks.
1 »