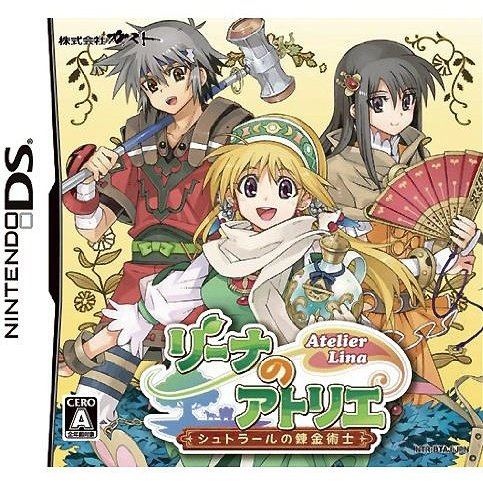 Lina no Atelier: Strahl no Renkinjutsushi

Works on all systems sold worldwide, a correct regional account may be required for online features.
1w Expected stock arrival within 1 week
Price
US$59.90
Play-Asia.com Return & Refund Policy
Click on a thumbnail to see more pictures for Lina no Atelier: Strahl no Renkinjutsushi

Lina no Atelier has all the elements: cute characters, a sweet story and lots of items making and monsters slashing.

Lina has just gotten her alchemist license and can't wait to show off to her friend Luon. However, Luon just had a heated argument with his father and has ran away.

Chasing after her hot headed friend into an ablazed forest, Lina is being accused by the fairies for arson and is forced to rebuild it.

Although quite unwilling, this is the first chance to put what she has learned in the classroom into real use. Build roads, gather materials and slay monsters, this game uses all your creativity.

If you are familiar with Lina no Atelier: Strahl no Renkinjutsushi, why not let others know?

pwsnafu (2) on 07, Aug. 2010 10:17 (HKT)
Too much trading, too little alchemy...
Lina no Atelier is marketed as an alchemist game with trading on the side. Unfortunately the game does not play like this. The first year is dominated by raising capital by selling goods, and the only readily available goods in the early game are the ingredients you need for alchemy. Worse, in the late game, it is possible to bypass the money making ability of alchemy, and trade weapons to earn an easy million, literally, in only a week of in-game time. Thus fans of the Atelier series will most likely feel unsatisfied. That's not saying there is no alchemy in the game, there is plenty in the alchemy academy ending. But the above problems do make it very difficult.

The game does have a New Game+ option, which means the above problems can be rectified. Not enough cash? Bring your previous balance over. Not enough ingredients? Bring your precious items over from the last game. With this, the game opens up, and I personally found the game much more enjoyable with this.
thomasluka (3) on 28, Feb. 2010 01:45 (HKT)
A little more than alchemist...
It is because this time you will also have to learn to be a smart businessman! Since Lina is the one who burns the forest (well the dwarfs said so), she has to earn much more money to rebuild the village of dwarfs, and the only way is to get herself into more than one job!
You will have to buy rumors all around in order to earn more money; the idea is new and interesting, but also a lot more challenging...sometimes you will feel it is VERY challenging.