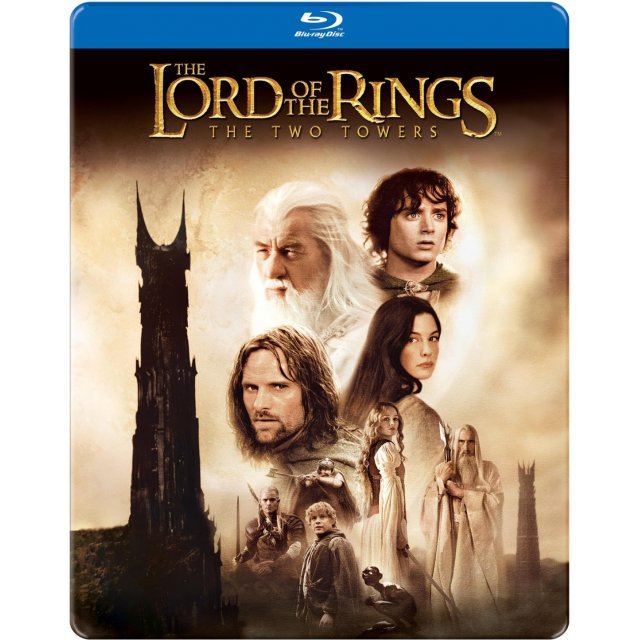 Lord of the Rings: The Two Towers [SteelBook]

The second film in Peter Jackson's series of screen adaptations of J.R.R. Tolkien's internationally popular Lord of The Rings trilogy, The Lord of the Rings: The Two Towers literally begins where The Lord of the Rings: The Fellowship of the Ring ended, with the Fellowship splitting into three groups as they seek to return the Ring to Mordor, the forbidding land where the powerful talisman must be taken to be destroyed. Frodo (Elijah Wood), who carries the Ring, and his fellow Hobbit Sam (Sean Astin) are lost in the hills of Emyn Muil when they encounter Gollum (Andy Serkis), a strange creature who once carried the Ring and was twisted by its power. Gollum volunteers to guide the pair to Mordor; Frodo agrees, but Sam does not trust their new acquaintance. Elsewhere, Merry (Dominic Monaghan) and Pippin (Billy Boyd) are attempting to navigate Fangorn Forrest where they discover a most unusual nemesis -- Treebeard (voice of John Rhys-Davies), a walking and talking tree-shepherd who doesn't much care for Hobbits. Finally, Aragorn (Viggo Mortensen), Gimli (John Rhys-Davies), and Legolas (Orlando Bloom) arrive in Rohan to discover that the evil powers of Saruman (Christopher Lee) have robbed King Theoden (Bernard Hill) of his rule. The King's niece owyn (Miranda Otto) believes Aragorn and his men have the strength to defeat Saruman, his henchman Wormtongue (Brad Dourif), and their minions. owyn soon becomes infatuated with Aragorn, while he struggles to stay faithful to the pledge of love he made to Arwen (Liv Tyler). Gandalf (Ian McKellen) offers his help and encouragement as the Rohans, under Aragorn's leadership, attempt to face down Saruman's armies, but they soon discover how great the task before them truly is when they learn that his troops consist of 10,000 bloodthirsty creatures specially bred to fight to the death. Most of The Lord of the Rings: The Two Towers was shot in tandem with The Lord of the Rings: The Fellowship of the Ring and The Lord of the Rings: The Return of the King during a marathon 18-month shooting schedule, overseen by Peter Jackson.

The Lord of the Rings: The Fellowship of the Ring [SteelBook Edition]
~ Elijah Wood, Ian Mckellen, Viggo Mortensen, Sean Astin, Orlando Bloom
US$ 24.99

No reviews for Lord of the Rings: The Two Towers [SteelBook] yet.