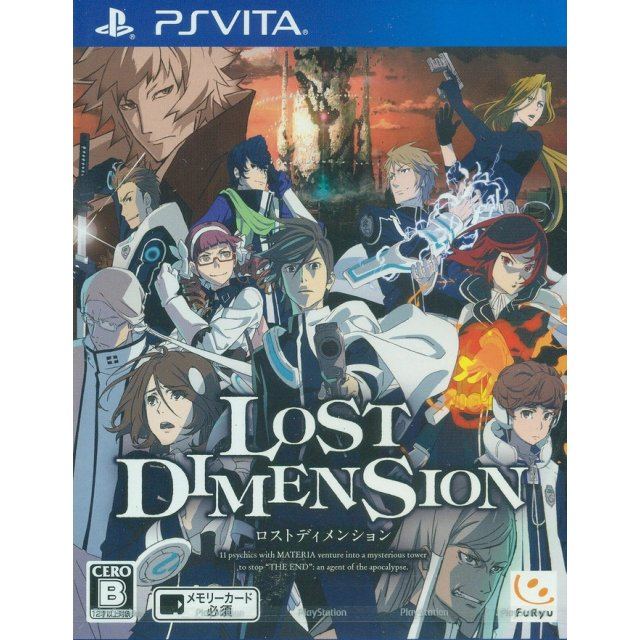 sold Out of print / Out of stock.
Manufacturer
FuRyu
Rated By Our Customers
Compatible With PlayStation Vita (PS Vita)
Version


Click on a thumbnail to see more pictures for Lost Dimension

From the development team alone, FuRyu's new title is looking to be a great RPG to look forward to!

Taking place in a post dystopian future not too far from the present, the game revolves around Sho Kasugai and his special ability called "Vision" - his powers of premonition are essential in saving people from mass destruction against a mysterious enemy known as "The End." Recognizing Sho's power, the UN forms a team named S.E.A.L.E.D. to track him down.

Without giving away too much, from what's been said about the story, player can expect an exciting tale of tension, betrayal, and redemption. This coupled with the expectations from the dev team as well as some great 3rd person tactical strategy is something all fans of JRPGS can be excited about!

If you are familiar with Lost Dimension, why not let others know?

Chiquihuite (13) on 30, May. 2017 05:19 (HKT)
Mediocre storytelling, very fun gameplay
First, a couple things that really held this game back for me:
-The overall story makes no sense and feels incredibly forced. It was like they had this amazing concept for a game (climb a tower while gradually eliminating your own party members), and then struggled to come up with a plot to support it.
-Most of the characters are shallow and uninteresting, which makes it hard to care when they're eliminated. If I was sad to lose someone, it was because I valued them for their battle prowess, not because I was attached to them.

That said, there's a lot to like about this game:
-Combat is deep and interesting. Lots of different stages with different strategic "puzzles" to solve and an amazing variety of different ways to do so.
-The gameplay design is both creative and clean. Every character is powerful when used correctly, and they all bring unique powers to the table that are a blast to experiment with.
-The character progression system, while complicated and somewhat confusing, is a lot of fun once you get the hang of it. The element of materia when you lose a party member adds another layer of richness to the system that I enjoyed a lot.
-Individual battles and the game as a whole don't feel excessively long, which was nice, especially since I didn't enjoy the plot much.

Overall: If you like strategic combat, you'll enjoy this game a lot. If you're just picking it up for the story, you may want to look elsewhere.
ernest8192 (14) on 05, Mar. 2016 16:31 (HKT)
Highly Recommended
Interesting concept for a SRPG game.