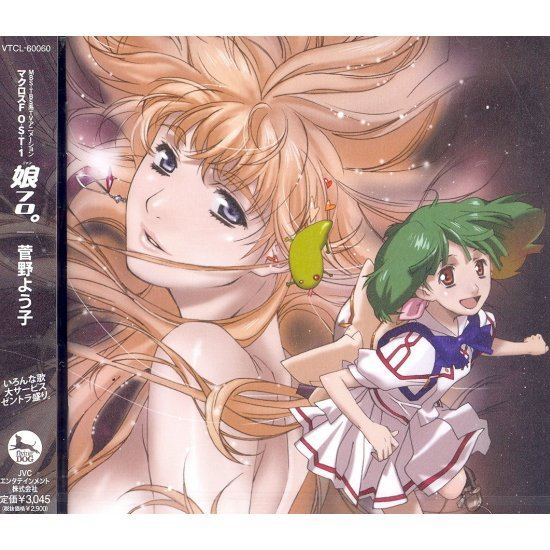 Macross Frontier is the newest installment in one of Japan's favourite mech series. Music and pop stars has always been sharing center stage with the carefully and stylishly designed mecha. One of the recurring themes in this series is music's ability to connect people and stop violence.The O.S.T carries the opening and ending themes sung respectively by one of Japan's favourite seiyuu/J-pop artist Maaya Sakamoto and Sheryl Nome (feat. May'n) the super star in the Macross Frontier Universe.Aside from having an all star cast working on the vocals, the instrumental background music, scripted by Yoko Kanno, one of the best music producers in the world of anime, are just as much a highlight as the songs.

If you are familiar with Macross F / Frontier Original Soundtrack - Musume Furo., why not let others know?

maomao_1990 (11) on 25, Jan. 2013 12:57 (HKT)
Very good Album!
for a macross f fans it is a great collection
chaxster (1) on 19, Jun. 2008 16:21 (HKT)
Assorted Goodness
I'm usually not much for soundtracks and prefer listening to albums from regular bands, but once in a while, I make an exception. This Macross Frontier release had me very interested, since I'd been following the series for a little bit and dug what I'd heard of the music so far. Plus, the news that genius composer Yoko Kanno was doing the score added more than enough reason to give it a fair listen.

Seeing that music plays a big part in the series (it was the gift of song that ended the war between the humans and the alien Zentradi earlier in the Macross universe), there was no shortage of themes to play around with. Sheryl's whole J-pop act obviously hogs up a lot of the stage, Ranka's timid but soulful tunes also draw a good deal of attention, and then there's a whole lot of random music that makes for excellent punctuation.

It was a bit tricky getting the hang of who's doing what, but it seems like Sheryl's songs are handled by May'n, who does a decent job in the last few numbers, especially the end credits song (and album closer), Diamond Crevasse, which plays out like some sentimental Disney number, throwing in a bit of swagger here and there. All the Sheryl on stage numbers early in the album aren't as tight in comparison, though...and those sped-up electronic beatz are annoying too.

Nakajima Ai is responsible for all Ranka's songs and she's easily the best singer on board here. Her version of the horribly cheesy, Engrish-ridden (but still somehow great fun) What 'bout my star is way better than the onstage version earlier in the album. And it's also owing in part to her voice that Aimo – Tori no Hito is one of the most beautiful songs I've heard in a while. I happened to be up in the mountains while I was listening to the album, and that song managed to just about freeze time for me. The perfect track for solitude and vast open spaces. She also takes care of some super-short quirky ad jingles that act as cheeky juxtaposition in between the longer songs.

And to complete the vocal trio, Sakomoto Maaya (who's supposed to be a big thing in J-pop circles) does the extended version of the intro theme Triangular. Some would probably take issue with the high nasal timbre of her voice, but I suppose that's the biggest caveat with regard to J-pop in general. Anyhow, the song benefits a hell of a lot from the extended playtime – there's some proggy parts in the midsection that even reminded me of Shadow Gallery. Must have been a pain cutting that out to make the TV edit.

That leaves Yoko Kanno and her backing score. This woman is one of the biggest names in the Japanese music production, and for good reason. I haven't heard that much of her work yet – my experience is mostly based on Cowboy Bebop and Ghost in the Shell: SAC, but the versatility and skill she showed in those two were enough to convince me of her worth. Macross Frontier has a slightly less outlandish feel than, say, Cowboy Bebop when it comes to the musical direction, but it's still awesome nonetheless. There's the usual typical orchestral space opera fare, but then there are also more pastoral themes (reminiscent of her work for Ragnarok Online 2), and other parts that actually sound pirate-y (like arr!). It's a healthy mix of a lot of different sounds, and the only time it feels a bit dragging is from Tally Ho! To Bajura, where there's 12 minutes of spacey themes playing – a smaller song in the middle to break the monotony would have helped.

That being said, I have to make a disclaimer. If you're not into the whole Japanese female vocal thing that anime brings to the table, then your mileage is definitely going to vary. Even so, this is a humdinger of an album and has some of the best pop I've heard in a while.
walker (1) on 19, Jun. 2008 00:15 (HKT)
Very good Album!
mp3 can't compare to this real CD audio. This all Macross Frontier fans wants.