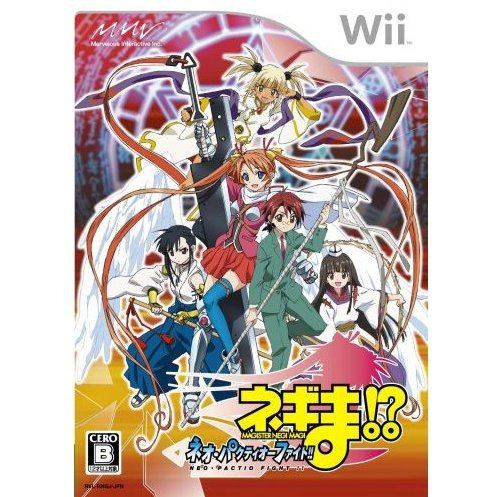 Marvelous
Compatible with Nintendo™ Wii (Wii™)
For JPN/Asian systems only.

If you are familiar with Mahou Sensei Negima!? Neo-Pactio Fight!!, why not let others know?

videogameexpert (13) on 17, Nov. 2010 02:49 (HKT)
A fun brawl-like game!
A great four player battle game where you can control Negi and some of the girls of Class 2-A in an all out knockout fight in a variety of stages. Gameplay slow but still quite fun, graphics good for an anime game, and the music was quite good.
rosey51950 (5) on 04, Nov. 2009 14:21 (HKT)
mahou sensei negima!? neo-pactio fight!!
the negima figthing is a good but not great fighting game and here's why, ok first you have a total of only 10 people to play with yet you chose a total of over 30 assis people! don't you think it should be they other way around? plus some fighters in this game are more powerfull than other fighters, some can only do two combo attacks and hurt you a little bit while others do 5 to 6 hit combos and do a lot of damge! dam! now thats unfair : ( also not much stages to chose from and the annoying mini games that happens right in the middle of the fight! but story mode is nice, some of the fighting is fun and the finshers are nice as well, over all if your negima fan and you can handle the cons then you will like this game a 3 out 5
nkbswe5 (2) on 01, Apr. 2008 15:29 (HKT)
Its Negima!?...in a good way
Negima!? Neo Pactio Fight is indeed a very good game. I wouldn't say its like Super Smash Brothers: Brawl, but its not a horrible fighter like most anime games are.
The only problem is it seems to have a limited number of attacks, but since I know no japanese, I might be missing something (not to mention I don't know how to use my support characters ;o_o)
But even though I don't know japanese, I still highly enjoy this game, but probably because I'm a Negima!? fan. There is a lot of fan service (not the kinky kind) like the pactios and attack names.
Lost a star because I can't read japanese and so learning the controls and what some attacks do is difficult, and it isn't the best fighter ever.
But for a Negima!? fan, this game is 100% the best Negima game out there.
CODEGEASS (18) on 12, Sep. 2007 21:56 (HKT)
BEST NEGIMA GAME EVER
IT\'S LIKE SUPER SMASH BROS BROWEL WITH NEGIMA CHARACERS IN IT.
THE BEST NEGIMA GAME EVER.
PLAY UPTO 4 PLAYERS.
ADVENTURE + BATTLE GAME.