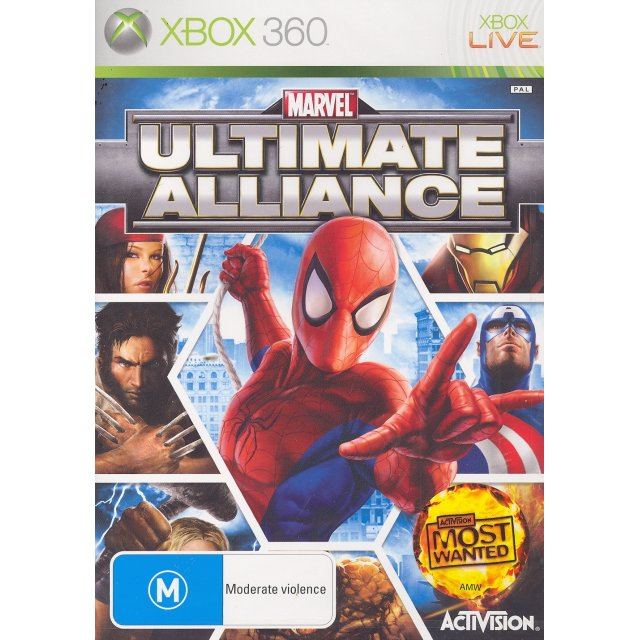 Activision
Rated
By Our Customers
Compatible with Xbox360™ (X360)

sold Out of print / Out of stock.
Manufacturer
Activision
Rated By Our Customers
Compatible With Xbox360™ (X360)
Version


Click on a thumbnail to see more pictures for Marvel: Ultimate Alliance

Marvel™: Ultimate Alliance is an all-new action/RPG where players create their Marvel dream team from the largest roster of Super Heroes ever in an epic quest that will determine the fate of Earth and the Marvel universe. For decades, Earth’s Super Heroes have opposed evil in their own cities, and on their own terms. But now, Dr. Doom and a newly reformed Masters of Evil have plans for world domination, and the heroes must band together to defeat them.

Playing as some of the most revered Marvel characters, gamers will embark on a dangerous journey across exotic terrain and well-known comic book locations like Atlantis, the Shield Heli-Carrier and the Skrull home world in an attempt to defy the world’s most notorious Super Villains. Created by Raven Software, Marvel™: Ultimate Alliance lets players control the most powerful Super Hero alliance the world has ever known.

A great fun game, though this may be a port from PS2 but it's fun nonetheless especially in HD.
[This review is based on another version of this product]
Tyrion76 (46) on 12, Jul. 2011 08:39 (HKT)
Old-school
Brawler, pretty basic, but due to the extensive roster of Marvel characters, it keeps you playing.
PuNiao (365) on 06, Feb. 2007 11:42 (HKT)
Marvel Ultimate Alliance
Marvel Ultimate Alliance is the best Marvel superhero game ever created, period. The Xbox 360 title is conceptually similar to the previous two X-Men Legends game -- put four superheroes together in enclosed settings, switch off your brain and start mashing those buttons to unleash a dazzling firework display of mutant powers. But instead of the usual X-Men mutants, you get to select from a generous offering of 20 Marvel Universe characters. You get favorites such as Iron Man, Captain America and Spider-Man, or less mainstream characters including Luke Cage, Elektra and Ms Marvel. Even more impressive are the wide selection of enemies and other characters you will encounter. Goofball villians such as Mysterio, Tiger Shark and Asgardian god Balder also do cameos. Even Uatu the Watcher -- a big-headed alien who does nothing but observe the universe -- pops by for a while. Later, you get to meet the biggest baddies of them all -- Galactus, the Devourer of Worlds!

Indeed, the fun of this game is trying out as many characters as you can, and unlocking all their possible powers and costumes. There is nothing as nostalgic as controlling the 1970s Astonishing (yellow and black) version of Wolverine or the black-costumed version of Captain America. Put well-known heroes such as The Fantastic Four or The New Avengers in your team and you get extra fighting bonuses. The game is gorgeous too. No more cartoonish cel-shaded graphics found in previous games. The superheroes are now modelled in full 3D with fantastic detail and realistic movements. The only gripe you\'ll have with the game is the erractic game camera. The simplistic ways in which huge boss characters are brought down and the overly-detailed environments make it hard to discern who your superheroes are actually bashing. But really, stop reading and go buy this game now.
1 »