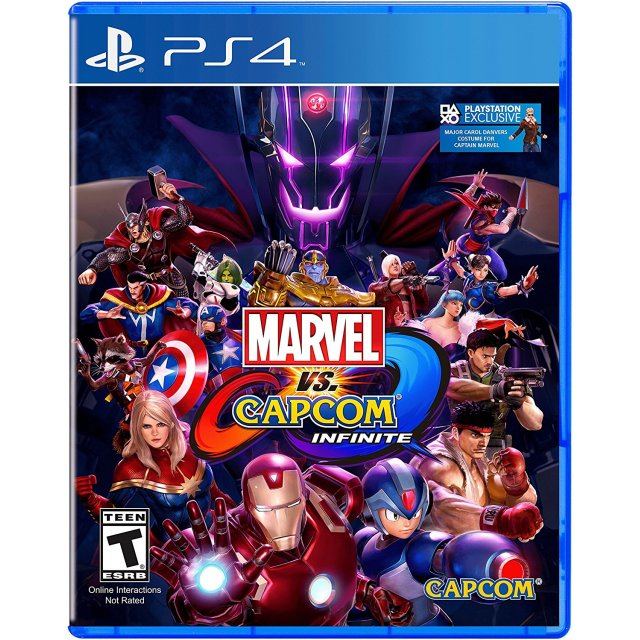 Works on all systems sold worldwide, a correct regional account may be required for online features.
24h In stock, usually ships within 24hrs. (Only 1 left in stock.)
US$31.99
Limited time offer - Secure yours now before the offer expires!

Click on a thumbnail to see more pictures for Marvel vs. Capcom: Infinite

Imagined and created through a shared vision between the two companies, Marvel vs. Capcom: Infinite will feature a variety of exciting and accessible single player modes and rich multi-player content for new players and longtime fans alike. In addition to single player Arcade, Training and Mission modes, a visually stunning and immersive cinematic Story Mode will put players at the center of both universes as they battle for survival against a sinister new threat. Marvel vs. Capcom: Infinite is being built to highlight a combination of iconic locations and fan favorite characters from both universes, including Captain Marvel and Iron Man from the Marvel side, and Ryu and Mega Man X from Capcom.

Samurai Warriors: Spirit of Sanada
US$ 20.89

Atelier Firis: The Alchemist and the Mysterious Journey
US$ 41.99

If you are familiar with Marvel vs. Capcom: Infinite, why not let others know?

leandrorizzato (216) on 23, Jun. 2018 02:14 (HKT)
Good Game.
A good game, but UMvC was very better. Good graphics and musics. A cool gameplay and combos, but I really prefer SFV, than this game, to say a fighting game. You can fun on online battles and local battles with friends.
rogerio.mayumii (1) on 02, May. 2018 08:21 (HKT)
Product
I am very satisfied with the product the game came in great packaging came fast in 2 weeks perfect without any havoc.
I am very satisfied with the fast response customer service I am satisfied with general website okay!

Estou muito satisfeito com o produto o jogo veio em ótima embalagem veio rápido em 2 semanas perfeito sem nenhum estrago .
Estou muito satisfeito com o atendimento ao cliente resposta rápida estou satisfeito com site em geral ok!
[This review is based on another version of this product]
choanikijin (141) on 12, Oct. 2017 21:29 (HKT)
IS MAHVEL BAYBEE! but with Infinity Stones?
Well OK, the game plays just as good as any Capcom fighter except with the inclusion of the Infinity Stones (renamed from Gems to synch with the Marvel Cinematic Universe, duh...). Most probably the stones won't be allowed in competitive play, but apparently Capcom will have a specific tournament where the stones will be allowed. The roster gets major tweaking as any Marvel character not owned by Marvel Studios get the axe, the graphics are barely an upgrade from UMVC3 (meanwhile Arc System Works'-programmed Dragon Ball FighterZ plays AND looks like the anime) and the story mode can be completed within hours. If you are a fan and/or fighting gamer you will love it, but if you are a casual gamer probably you couldn't care less when there are other games more interesting than this.