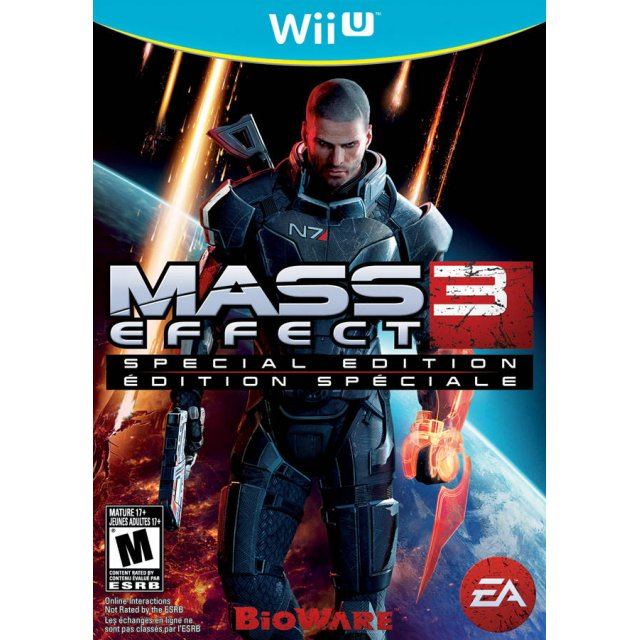 Collections
Electronic Arts
Rated
By Our Customers
Compatible with Wii U™ (Wii U™)
For US/Canada systems.

NTSC
1-2w Expected stock arrival within 1-2 weeks.
US$18.39
Manufacturer
Electronic Arts
Rated By Our Customers
Compatible With Wii U™ (Wii U™)
Version

Take Earth Back.Mass Effect 3 plunges you into an all-out galactic war to take Earth back from a nearly unstoppable foe – and how you fight that war is entirely up to you. Groundbreaking interactive storytelling drives the heart-pounding action in which each decision you make could have dire and deadly consequences. You are Commander Shepard, the only one who can save Earth from annihilation.BioWare makes its debut on the Nintendo console with the gripping blockbuster game of the year: Mass Effect 3 - coming to the Wii U™ console with brand new features and content that fully take advantage of the Wii U hardware. Command the battlefield like never before by using the Wii U™ GamePad to issue commands and unleash devastating attacks. Bonus content includes a new mission and squad member, an exclusive new weapon, the Extended Cut ending, and an interactive backstory experience detailing previous events in the Mass Effect universe.

If you are familiar with Mass Effect 3: Special Edition, why not let others know?

Velfaz (8) on 07, Aug. 2015 16:31 (HKT)
No title
It truly is an interesting and enjoyable game, totally recommended.
ddbangsy@gmail.com (16) on 15, Mar. 2014 11:50 (HKT)
Great looking game!
Mass Effect 3 on the Wii U looks and plays brilliantly! It's a good fun cover and shoot game that has plenty of content and will last you a long time.
This game makes great use of the Gamepad, but you can use the Pro Controller if you prefer.
Also, the multiplayer is great online and has very active fun community!
nanerlon (16) on 13, Mar. 2014 23:21 (HKT)
Excelente fim de uma saga.
O wii u facilita demais o jogo, no game pad da para vc localizar os inimigos e selecionar seus soldados com muita rapidez e eficiência... o jogo é ótimo vc fica preso ate o fim. Obrigado play asia.
erikqkh (1280) on 30, Dec. 2013 03:38 (HKT)
Excellent!
Good game!
[This review is based on another version of this product]
victormiranda7 (43) on 21, Dec. 2013 19:33 (HKT)
Awesome Ending for this Unforgetable Trilogy
Guys, this game is awesome!! The way it conducts us to the closing of the plot envolvig Captain Sheppard and his fellows keeps us in front of the TV until the last line of the credits is gone. A must buy for any PS3 owner.
1 »