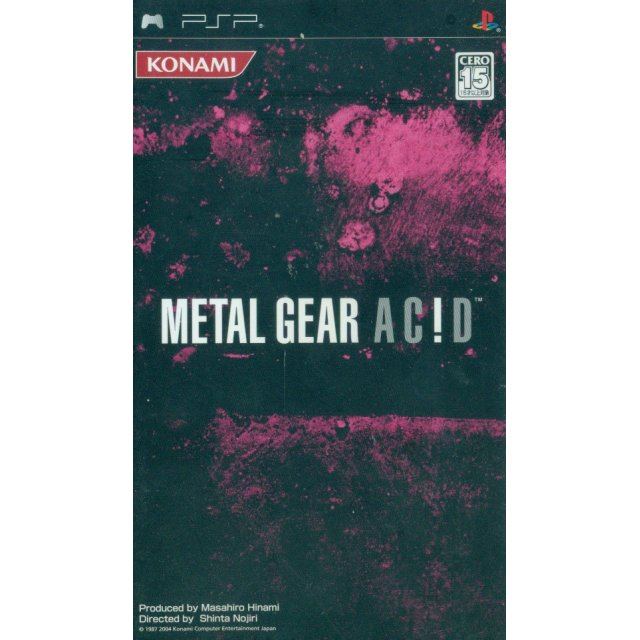 Works on all systems sold worldwide, a correct regional account may be required for online features.
1w Expected stock arrival within 1 week.
US$64.99
Our previous price:US$ 104.90
You save: US$ 39.91( 38% )
Manufacturer
Konami
Rated By Our Customers
Compatible With Sony PSP™ (PSP™)
Version

Works on all systems sold worldwide, a correct regional account may be required for online features.
1w Expected stock arrival within 1 week
Price
US$64.99
Our previous price:
US$ 104.90
You save:
US$ 39.91( 38% )
Play-Asia.com Return & Refund Policy
Click on a thumbnail to see more pictures for Metal Gear Acid

The legendary Metal Gear series returns with a whole new gameplay system utilizing strategic battle cards that focuses on deep tactical strategy with an entirely new Metal Gear storyline. As the role of top-secret agent, Solid Snake, players will make calculated decisions to plan out their infiltration strategy and accomplish the mission in a turn-based style of game. Metal Gear Acid delivers the trademark stealth-action experience in a new game for the PSP handheld system.究極のステルスゲーム「メタルギア」から生まれた完全新作オリジナルストーリーシリーズでおなじみのキャラクター、アイテムなど200種類以上をカード化して、特徴や組み合わせを駆使して任務を遂行。「ステルス」「カード」「ストラテジー」の3つの要素が融合する全く新しい思考型ステルスゲームがPSPに登場！

Need for Speed Underground Rivals
US$ 46.99

If you are familiar with Metal Gear Acid, why not let others know?

newinjapan2002 (143) on 09, May. 2006 04:54 (HKT)
Loved it
Great game. And it should go without saying, if you can\'t read Japanese, don\'t buy the Japanese version! Of course it is going to be difficult to understand.
That said, the card system is really good, I\'m pretty impressed with the new style of gameplay. It\'s not like MG on a PS2, but then why should it be?
There are a few awkward things in the game, watching huge dialogue cutscenes over and over again if you die, opening doors, at times frustrating camera angles, but nothing so severe as to outright ruin gameplay.
Recommended to anyone who isn\'t expecting a brainless shooting game.
Anonymous on 04, Apr. 2005 07:42 (HKT)
An odd idea, but very deep gameplay.
The game is excellent... once you get the hang of it. A helpful tutorial is essentially nonexistent, but when you get the ins and outs of the deep gameplay, it\'s a rewarding experience. One of the big pluses of the gameplay is that while it isn\'t a stealth-action game and is really a strategy game, it\'s much nicer as a portable game.

As long as you find a guide of some sort to help you get a feel for playing it instead of wading through rather frustrating dialogue trying to figure things out, I highly recommend it for fans of the MGS games and strategy junkies alike.
Anonymous on 31, Mar. 2005 00:02 (HKT)
No title
i lick it
gperez (1) on 26, Dec. 2004 01:30 (HKT)
Impopssible to play
If you dont know any japaneese, to play this game is impossible. It takes forever to get you to the action and all the dialagos are too long even ifg you were able to understand them.

I have never been so frustrated with a game in my life !!!!!

it\'s basically just issuing orders to Snake, saying go to this particular spot, shoot, go up this ladder, etc. (basically like the original), but in a more indirect way, which makes it more conveinient and easy to play on the go (you can\'t watch the screen constantly when walking down a busy street, can you? =P)

I\'ll give it 5/5, excellent graphics, nice character pic artwork and gameplay which is both good and practical

worth buying for any metal gear fan!