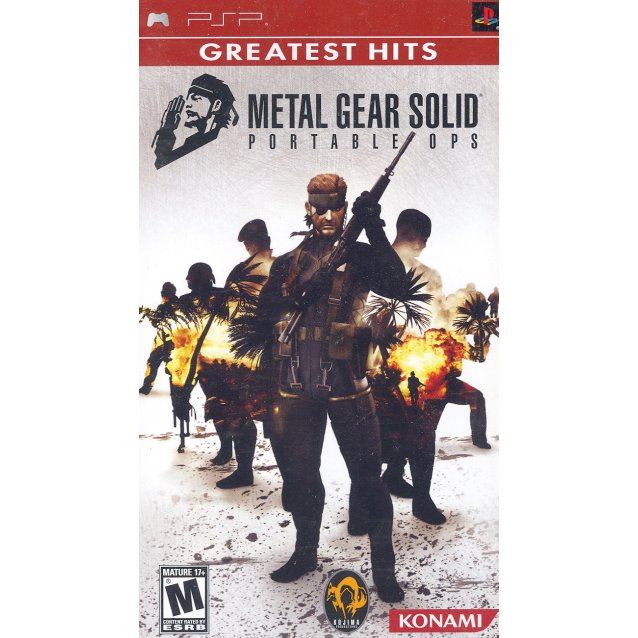 Metal Gear Solid: Portable Ops
Fans of the Metal Gear Solid (MGS) series have patiently waited for the game to make it to the PlayStation Portable (PSP). There was the turn-based strategy game Metal Gear Acid (MGA) and its sequel, but its gameplay was not quite like the quirky, yet heart-pumping tactical espionage that was MGS.

If you are familiar with Metal Gear Solid Portable Ops (Greatest Hits), why not let others know?

athzem (105) on 15, Mar. 2016 02:31 (HKT)
Better than expected
I have played Metal Gear Acid and I thought this was similar to MGA. But I was totally wrong. Portable Ops is way better than I expected and the feel of playing it is more like playing Peace Walker. And this game also fills some missing plots in MG storyline.
Yukikaze (58) on 22, Jul. 2015 04:08 (HKT)
The Lost Chapter
One of my favorite MGS games of all time. Great Value for a great game.
enriqueachirica (2) on 24, Apr. 2015 08:40 (HKT)
Muy bien
A pesar de que kojima no se involucró, muy buen juego
x (34) on 03, Jun. 2008 17:51 (HKT)
METAL GEAR PORTABLE OPS
i'll be a dissenting voice here, for those of you who don't do a lot of connected PSP play. while the pokemon-like wireless aspects of this game are a technical achievement, it does make this a different game than straight-up stealth action. the levels in this game seem designed to facilitate the ally-collecting aspect of the game, but don't really present a the game's world in a realistic (ie. engrossing) way. as well, i found the controls a little counter-intuitive, even with some tweaking. all that being said, the game's use of the PSP's wireless modes is original and a real achievement, if that's the type of game you want to play. if you just want to sneak around and complete mission objectives to further an intriguing story, you ought to play one of the syphon filter games.
rudy_h7201 (120) on 21, Sep. 2007 12:43 (HKT)
great game
It\'s a great game, finally I know the missing stories in saga. Hopefully Konami will release digital novel version for Outer Heaven stores. Thx play-asia, for fast delivery :)
1 »